This year’s race incorporating the Kathleen O’Sullivan Memorial Trophy was a fitting tribute to a great lady with great commitment from all the club members under the direction of race organiser Richie McNamara, and spirited racing from all our riders. I wont go into thanking all who contributed, but suffice to say it was an event in which we as a club can all take great pride. The morning started with Sean Rock placing 4th in the U14 event, and local lads Keith Daly (Drogheda Wheelers), Chris O’Hare (Balbriggan CC) and Colm Crawley (Balbriggan CC) dominating the U16 event despite being total outnumbered by the lads from Bray, placing 1st, 2nd & 4th respectively. 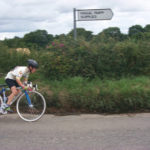 U12: Niall in action 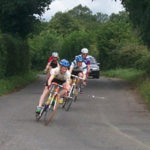 U14 Race: Sean leads them into the bend 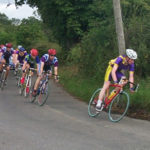 U16 Race: Chris O’Hare in front 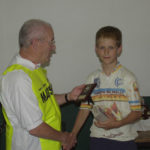 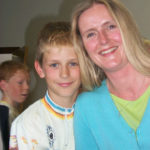 Karen with the All Ireland U11 Champ 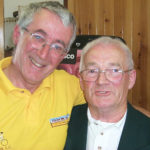 Eamonn & Johnny: All over for another Year

In the main event both out A riders, Simon & Pepe, were riding quite well with Simon getting into most of the early breaks but unfortunately missing the main move on lap 3, but Pepe infiltrated this one. This break of about ten riders contained a lot of heavy hitters incl. Michael McNena and some very strong riders from the North. Their advantage grew steadily with all incl. our own Pepe riding strongly. With a man in the break it was up to the teams that missed out to chase. Simon got into the chasing group of riders but these weren’t making any ground on the leaders and I suppose they wouldn’t be too keen on bringing Simon up anyway. This was the second week in a row that Pepe had got into the decisive break and was doing quite well until constant attacks on the final lap eventually wore him down. Only one B rider had made it into the lead groups so it left 5 places to fight for and we were ably represented by Matt Kelly, Stephen Rock, Brendan Conway, Tony O’Malley, Sean Lally and Jason Kelly. Many of our riders tried to get clear but to no avail until Matt broke with Len Corrigan (DWCC) with two laps to go. When the gap got to 300 metres Sean jumped across to double our advantage. Brendan Conway came very close to getting across also but just couldn’t get those last ten yards. The lead trio then pressed home their advantage ably protected by the remaining Swords riders in the pack. Three hundred yards from the final corner Matt, on a signal from Sean, launched himself taking the DWCC rider by surprise. Both riders were tiring on the sprint for the line but Matt had gained enough distance to take it and 2nd placed B rider. With equal prizes for A and B riders it meant that there were still 3 places to contest and we still had 4 riders in the bunch to contest them. Despite attacks from all 4 it came down to a bunch sprint with Jason attacking into the last corner but cramped in the straight and finished 7th B, missing 6th spot by inches. Club President, Johnny O’Sullivan presented the Kathleen O’Sullivan Memorial Trophy to Overall winner Michael McMena (VC La Pomme) but the loudest cheer was reserved for 2nd B, Matt. But we weren’t finished cheering yet because Mick Rock and Pat Halpin took the first two spots in the Vets race! 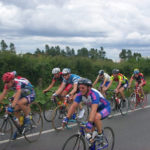 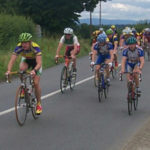 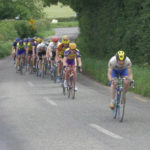 B race- Jason tries to escape 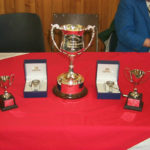 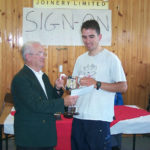 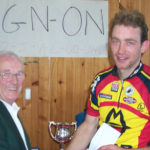 Loudest cheer of the day, 2nd B: Mat Kelly 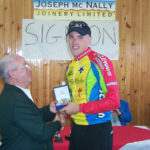 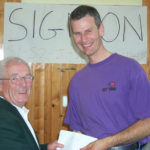 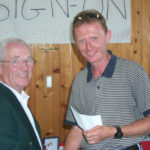 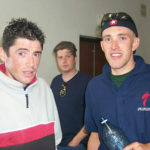