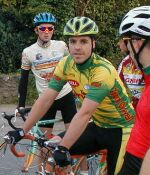 What was your introduction to cycling?
I think I was born with cycling shorts and Jersey. My Dad raced, Brother raced, Uncle raced, Grandfather did a bit and my Mum was a cyclist too before she met my Dad. So it’s in my blood. Spent my whole childhood camped out at races.

Your first big win?
First win, a club race at 15yrs, First Open win was a junior race in Lucan, First Senior win I think was the Conlon Cup in Kildare when I was 18yrs.

Your best season?
Best seasons probably 1992, 1993,1994 and 1995 (my last as a serious cyclist) Had lots of results, 2 stage race wins, 3 national medals, 3 Leinster medals,and way too many second places and third places to be proud of!

Career highlights?
Highlights? Just being able to ride the bike is a highlight for me. Every time I get on me bike I escape into a totally different world. The best thing that ever I did was to get back on a bike after a long absence.

What result/performance are you most proud of?
Proudest result? Riding in the winning break with Guerini (Now Telekom and Alpe D’Huez stage winner) and Belli (Faso Bartolo and Top 15 in the world) and Jonkers (now big Mat) into Carrick On Shannon and finishing 15 minutes up on the bunch. Unfortunately a couple of days later the Italians team car took a disliking to us and wiped me out big time. Ask Sean Lally about that one!

The Ras (or Gorey) how many and best performance?
Rode 8 Ras’s finished 7 ( See above for 92 Ras I got wiped out and spent a week in Hospital). Best Ras was riding for Ian Chivers in 1993. He finished 2nd overall and I had to stay with him all week to look after him. Never did anything overall in the Ras but got up on a good few stages.

Gorey won it and a couple of stages in the last century, then had to ride Blarney for a few years. Back riding Gorey again since coming back into racing and it is one great race for young lads.

Any good memories of the Park?
Best memories were as a kid being dragged up to marshal and take places for races being organised by the Da and also the old Tour Of Ireland finishes in the park were there would be easy 10,000 people at the finish watching. As a rider the only result I had in the park was 2nd in the prologue Time Trial for the Old Fingal 5 day stage race. I could never sprint so the Park Gallops never suited me. Leave them to the mad men (Sorry Simon!)

Memories of racing overseas?
Road in the UK for a while in London and rode GP of Essex, Archer and Cotswold races and got a pasting. Rode in the Eastway circuit a lot and best result was 2nd there. Went to Belgium a few times with the London team I was with and got my arse Kicked, that’s when I discovered drink and night clubs!

When things go wrong (Or the one that got away)?
Lost the Leixlip 3 day stage race to Michael Fitzgerald by 3 seconds or so in the last kilometre. Very embarrassing as I was in the Yellow jersey for the whole weekend. I was very tired in the last few kilometres of the last stage as I was defending the lead nearly on my own and fair play to Michael he jumped in the last kilometre and I could not react. I made up for it the next year by winning it by a bigger margin!

Best rider (amateur) that you have ridden against?
Best amateur I rode against would probably be Paul Slane from Belfast or Eamonn Byrne. Paul was national road race champ, won a stage in the amateur Giro and did a great ride in the Barcelona Olympics. Eamonn was the youngest rider to have won the Ras. Unfortunately both packed in racing very young.

Best Irish sprinter you’ve competed against?
Probably Paul Lee from my own club the Orwell in the mid 80’s. He had an unbelievable finish and rode with the Amateur La Vie Claire Team in France and won stages in the Amateur Tour Of Med and Mavic 1 races. A lesson though young lads, he was a naughty boy and paid for it with bad injuries! Most consistent sprinter would be Colm Bracken, hes around years and years and always gets a win every year.

How long with Swords & why you joined (or why you stay)?
I’d love to be in Swords a great club but I’d be ex communicated from my Family. I’ve been in the Orwell 32 Years I suppose!

Favourite present day Pro’s?
Favourite pro today would be Jalabert. He races from Feb to Oct and always tries and doesn’t whinge and moan.

Favourite Pro sprinter?
Favourite pro sprinter was Freddy Maertens, he won a stupid amount of races. 13 stages in one tour of Spain including the Overall. 7 stages in the Tour de France in one year. Twice world champion. He once won the Paris Nice taking every single stage. What a God. Today I love Cippollini, hes a character.

Race day nutrition (Breakfast — mid race drinks — recovery etc)?
Race day food. Breakfast; Muesli, Toast and Jam and fruit with a cup of teas. During race H5 bars and drink and gels. After the race some sambos and tea (Maybe a pint!)

What do you love most about cycling?
The crack at the races, the friendships you make in your club and the pure freedom of getting out on your bike and forgetting all your troubles.

Interested in any other sports?
I love boxing, my older brother boxed for years so we got dragged to lots of events. I also like Athletics particularly marathons. Not a soccer fan at all.

Favourite Cycling Magazine?
Cycling Weekly, the mother has been getting it for over 40 years now!

Best Cycling Book(s) you have read?
Fall From Grace by Freddy Maertens. An eye opener to 70’s pro racing. And what a legend.

What advise would you give to 1st year racer?
Be patient, it takes a couple of years to get going. Listen to the lads who’ve raced for years. Some good lads in Swords now, like the Lal, don’t be afraid to ask

How can they then turn good performances into good results?
Be realistic and set yourself reasonable targets. When you reach a target shift the bar a little bit higher. Be prepared to make some sacrifices but get a good balance in your life too.

Favourite cycling holiday destination?
I loved Tenerife, but ask the Lal, it is very, very, very hilly with bloody mountains everywhere, but it is beautiful. Malaga is a good spot too with lots of different routes. South of France is nearly as good.

Favourite tea stop
The new Jazz cafe in Skerries. I know it’s only up the road but on a lazy hangover day spin it is perfect.

Most enjoyable Tour (non racing)
Love the Wicklow 200. For me it is like an Orwell Wheelers reunion or AGM as all my club turn up to do it.