What was your introduction to cycling?
I was never very interested in cycling, I played rugby for years but got a bad knee injury, then I spent a few years getting nice and plump so I had to find something to keep me fit and the weight down. So out I went and bought a mountain bike, met a few guys in Rathfarnham and headed up the Dublin mountains and got my arse kicked!. If you think it’s bad getting left in somewhere like Oldtown you don’t what to find yourself left on the top of some mountain and not a road in sight. After a while I put slick tyres on the bike and started riding on the road more, eventually I bought a road bike and met up with the lads from Swords at the Lord Mayors one Sunday morning and knew straight away that I preferred the road. 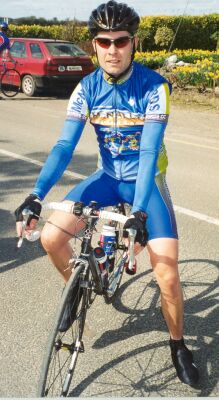 Your first big win?
First win a club league race in the black bull, unfortunately there’s only been a couple since. (Does winning a training spin sprint count?!)

Your best season?
The first year I started riding open races, I think it was 1998, I was at my fittest and the first taste of open racing is a great experience.

Gorey how many and best performance?
I rode the Gorey for the first time last year. It’s a great weekend and really enjoyed it, apart from the second stage when I got a bit of a hammering.Only for the small matter of me being on my honeymoon I’d be doing this year. ( and the fact I’ve done no training and am very unfit)

Memories of racing (or touring) overseas?
The first time I brought the bike overseas was last year when we went to do some training for two weeks in the costa del sol. It was great to get away to the sun in February and being able to just ride the bike all day. I could not recommend a trip like this enough so next time you hear of a group heading off get your name down!. I’ll be a bit jealous this year when the lads head off. I’d love to go to France or Spain some time to take in some of the big tour climbs, so let me know if you know of anyone thinking of it.

How long with Swords & why you joined (or why you stay)?
I’ve been with Swords for about 5 years, I joined because my contract with Mapei had run out!

Favourite present day Pro’s?
It’s hard to pick one but I was impressed with the way Jan Ullrich rode last year in the Tour, he kept the pressure on Armstrong and never gave up .Who would have had Jalabert down to win the Polka dot jersey after the ladder incident, it’s great to see him still get big results.

Favourite Pro race?
Over the last couple of years the Tour of Spain has to be my favourite race it his seen the most exciting racing, this has to be put down to the shorter stages lets hope this year is the same

Present bike?
Colnago Dream, I’ve had this bike for 3 years it’s a great frame and i’ll hold on to it for another couple of years (although Richie thinks it’s time I bought a new one)

Race day nutrition?
Cereal and a banana in the morning and then for the race energy bars and drink.

What do you love most about cycling?
When you know your at your fittest, it’s a great feeling when your going really well. A bit of slagging out on a spin is always good.

Interested in any other sports?
Rugby, International Football and a bit of Cricket. 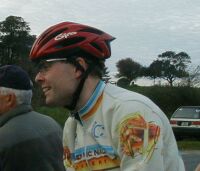 Favourite Cycling Magazine?
Cycle Sport, never go to the Toilet without it!

Best Cycling Book(s) you have read?
Lance Armstrong (It’s Not About The Bike) , Paul Kimmage was good well before it’s time.

What advise would you give to 1st year racer?
Don’t listen to people like me! Don’t believe everything a rider tells you, Talk to the guys that have done it all before.

How can they then turn good performances into good results?
Use your head and think. – Your not supposed to be listening to me.

Favourite cycling holiday destination?
Only been to the Costa Del Sol, But anywhere with warm sunshine has got to be good.

Favourite tea stop
Tara Hill with the Thursday Group when i really should be in work.

Most enjoyable Tour (non racing)
You can’t beat the Wicklow 200 , There is always a great crowd and an even better route.

Why would you recommend Swords CC
You get to meet a Great bunch of people all with different cycling abilities.