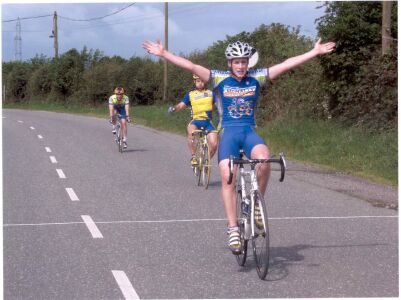 This race hosted by Usher IRC was run over 3 laps of the Green Sheds circuit. Keith got into an early break of with John Herety (Lucan) and Terry Ferris (DWCC). Early wasn’t the word for it….. It went at three miles and they were away for the remaining 33! The break were nearly joined at one stage by Mick Rock and two others but with escapees in at 20 yards they stopped riding and the trio were off again. A hard earned victory for Keith who showed that despite riding hard in the break, it didn’t take the edge off his sprint. A hard race and he was still tired when I spoke to him today.

Elsewhere this weekend Niall Rock was beaten by the width of a tyre at the National League Finals in Athlone and Grace was third in her race.

Report from Keith Daly below:

A win at last!!!!! I was so happy to get a win before the season was over. I felt good on the day so I was confident and knowing the course was an advantage. It was a ten-mile lap and we had three laps to do with a three-mile lead out to the lap, which made the race 36 miles long. I did my normal race preparation, warm up, food and my pre race ‘pep talk’ with Simon. At the start line the sun was shining and there was a surprisingly big bunch of juniors, Vets and C`s. There was an attack from the line and two got away. After about a mile I tried getting across but got stuck out in ‘no mans land’ and was caught by the bunch. After the first 3 miles we went on to the first lap. Terry Ferris jumped away and made it up to the break. I started to worry and decided to try it again. I took me while but this time I made it. When I got there James Lawless got blown out which just left the three of us. We started working well together and got a 30 second gap. By lap 2 we were nearly caught by a small group, which I think contained Mick Rock; they were only about 10/15 seconds down. We rode harder and approaching the last lap the gap was 57 seconds. I started thinking about the sprint and I knew Terry was the man to watch. What made me really worry was Terry missing a few turns I knew what he was doing so I let a few shouts at him to get him working again. With about 4 or 5 miles to go the third member of our party attacked us and got a good little gap. He was a rider from Stagg cycling club, his name was John Heraty. We worked hard together and caught him with just over a mile to go. That’s when the ‘cat `n`mouse’ started. I felt strong. The Stagg rider was stuck on Terry’s wheel and they both seemed to ignore me. Terry thought he was the best sprinter and so did John. That annoyed me a little so I wanted to prove a point. I started the sprint very early on which I never do but it was down hill with a tail wind. I also thought a long sprint would hurt the other two as I got the feeling they were tired and starting to cramp. I put the head down stuck it in the biggest gear and went for the line. I looked under my arm to see Terrys` wheel coming at me but he died off when there was a good 100 metres to go. I was right about the long sprint and I had plenty of time to celebrate (I’m just glad they didn’t come around while I had my hands up). I knew that wouldn’t happen because when a sprinter gives up that’s it!!!!. ! I’ll be on the hunt in Kilmessen for another win. So watch this space………