Race 1: This turned out to quite an active affair race with attacks virtually from the line, most of which included our own Anto McMahon and Se Weston (DWCC). Many small groups attempted to escape without success including one that looked particularly dangerous, a five man which included our own Sean Lally and Pat Halpin. A break towards the end of lap 2 proved decisive. A move by Anthony McMahon and Se Weston (DWCC) was joined by Sean Bracken, Liam Keenan, Mick Usher, Eddie Mongey and John Heery. This seven stayed clear to the finish until a further split was forced by attacks over the closing miles. It was left to 4 riders to contest the win. Anthony McMahon made the first lunge for the line, got a reasonable gap, but his move was was countered by the other three and the final sprint saw Sean Bracken (Usher) the win from Liam Keenan (Orwell) with Anthony McMahon (McNally Swords) taking 3rd as reward for his aggressive riding. 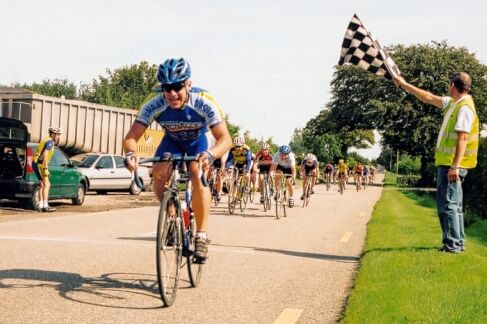 Yours truly! Taking the Win in Race 2

Race 2: My own race. Lots of attacking, esp from the irrepressible Peter McDunphy, but no one getting much of a gap. Paddy Fitzimons made a few solo moves but no one was going to time trial his way away from this group. Lots of jumps but no one allowed more the 200 yards. After a few attempts myself, and after watching better riders try repeatedly and fail, I decided that this was going to come down to a sprint. A puncture for Aidan Richardson (DWCC) made for one less danger man to watch. I figured the headwind in the straight would make the sprint one to go late in. After going from near the front over the last few weeks, this time round I decided to keep the danger men in front of me and go from further back. As I moved up I noticed a lot of the sprinters,incl Liam Maguire and Pat Halligan, were half way down the pack, so I launched. I was mindful of something Keith Daly had said to me on the Thursday spin, that a good sprint is about the jump. I seemed to have taken them by surprise and got a bit of a gap, but as I accelerated I could hear Liam’s shouts of encouragement. A great man to have on your side as he has an imposing presence in the bunch and much was down to riders watching him after his last win at this venue. Full throttle and ahead of me I could see a tiring Peter Schweepe, after his solo effort on the run in, and this gave me a target to chase. I (prob like some others) thought the finish was a the first car in sight so I gave it everything to catch him before this, but as I neared it , I realised it was another 100 yards to the line. So much for the plan of going late, ends up as one of the longest sprints I ever tried. Had to wait for the video replay to see what was happening behind, as I never looked back. Last race of the season for me as I start nights on Monday, but a great end to the season. Last year I was slaughtered in this race, completely unable to hack the pace, so to be in a position where winning was a possibility marks a significant improvement for me. Out on the town last night at a 40th, but stayed on the dry, and went home early mindful that today was an important race for me as my form has been on the way up over the last few weeks and I had dared to think I could win it.

Race 3: This was run as a 3 group CP, with Group 2 caught on the 2nd lap and Group 3 not being caught until Barberstown Castle on Lap 3. All together now and it was going to be down to a sprint. Colm Cassidy (St.Tiernans) lead it out of the bends coming into the straight , and started the sprint from there.He got a slight gap and held it to the line. Cassidy won by about 2 bikelenghts but the sprint for second place was fiercely contested by three riders with Des Howe (Newbridge Cutlery) taking it from Ron O’Rourke (McNally Swords) Luckiest man of the day had to be Fred Harte who was a close 5th ……too close as ‘someones’ pedal took out 7 of his spokes practically on the line. How he stayed upright is beyond me. One or two spokes more and the wheel would have collapsed. Ah well he now has a 25 spoke wheel he can use for Time Trials !!!!A good display from the Swords riders in this one with Dave Blake And Martin Doyle also finishing in the top 10.