This years National Underage Championships were organised by Drogheda Wheelers over three stages scored on points with the highest overall points total determining the winners in each age category. Swords were ably represented in two age categories U11 by James Morgan and U 16 Michael Daly, Stephen Halpin and Grace McNally.

Saturday morning’s time trial was a very competitive affair. In the Under 11 James Morgan placed 8th, a very good start to the competition. In the Under 16 section Stephen Halpin finished 6th overall in a time of 4.14 with Michael Daly 8th in 4.16 and Grace McNally 18th in 4.40.

Time for some R & R before the afternoon crit stage. This was held on dry roads over a two mile circuit the U11’s doing 3 laps while the Under 16’s did nine. In the U11 race James rode very aggressively to finish 8th , a great ride leaving him 8th overall going into the final day. At Under 16 a very fast competitive race saw Jeremiah O’Sullivan of Killorglin finishing alone to take the win while our riders rode strongly. Michael finishing 9th , Stephen 10th and Grace 18th. This left Stephen 8th overall, Michael 9th and Grace riding well for the team finishing 18th overall at the end of the first day.

Sunday say the weather take a turn for the worst with wind and heavy rain as the riders faced a road stage over an undulating six mile lap. The U11 raced over one lap while the U16 had five circuits to complete.

In the U11 race James rode strongly from the line and showed great grit and determination finishing 7th in the stage and 8th overall for the Championship. Only racing a short few months James seems to have a great future ahead of him.

The U16 race was a captivating affair which saw many riders out the back early on. Michael and Stephen were involved at the front and until a split on lap three saw them in a chase group of six. 30 seconds down at one stage the gap was down to 3 seconds with just over one lap to go. Recognising the danger the break put the hammer down again on the last lap to stay clear with Ciaran Enright (Kanturk) taking the sprint to win the stage. However, Michael and Stephen rode strongly to finish 8th & 9th with Grace again supporting the team in 15th place. The final overall saw Jerimah O’Sullivan of Killorglin crowned National Champion with Ciaran Enright second and Isaac Speers (Navan Avonmore) third. Michael and Stephen on equal points were only separated by the time trial with Stephen 8th overall and Michael 9th. Great performances at the highest level by both . The icing on the cake however was yet to come as a greatly gritty determined ride by Grace McNally saw McNally Swords CC crowned U16 National Team Champions edging out Kanturk in The Team Competition. A fantastic result. Well done to all.

James Morgan ready for the off in the TT 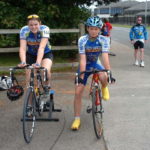 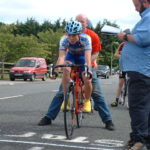 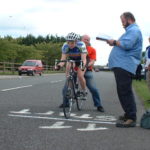 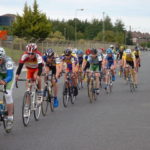 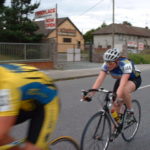 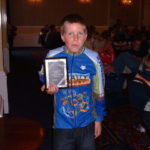 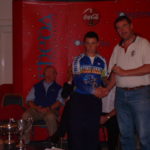 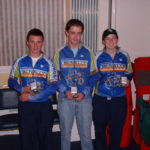 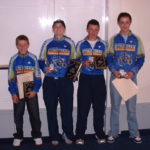