The Road to Athens 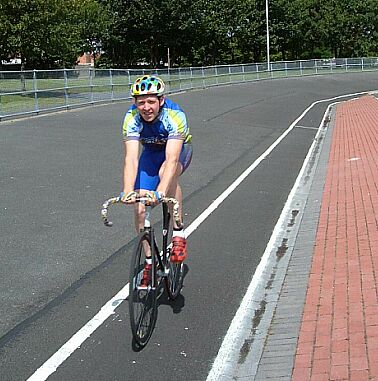 Ian training on the Track

I started cycling at the age of 12 with Banagher CC, which included 27 members. My first road race was and U14 event in Bohermeen. Rode a few underage races. I had been bitten by the bug but wasn’t taking things too seriously just yet. I was forced to take a two-year break due to a knee problem and spent the next few years touring and leisure cycling. I completed my first Maracycle in 1998. In 1999 I took part in the Border Trek and a Blazing Saddles Trip to Thailand. In 2000 I did a bit of senior racing (unattached) but had to focus more on my college finals. My first introduction to Tandem Cycling was in June 2000, the Malaysian Blazing Saddles Trip. The next two years were spent leisure cycling due to work commitments. I am also a big fan of football and have been playing both Soccer and Gaelic since I was 12. Training with the lads in the winter is a great way to keep fit. In 2002 I completed the first Blind Sports May Games for Tandem Racing and won the 10 mile Time Trial with Joanne McSherry. In 2003 I competed once more in the May Games and won the 25 mile Time Trial with Tony Ward. I also completed the Wicklow 200 and various Blazing Saddles Training Camps for the Tour de Tour. I completed the Coast to Coast with Mark Kehoe. In October we competed in the Navan Road Club Championships. We were handicapped and started 10 minutes behind. We landed a well-earned second place after leading the group for much of the race.

Training started to get more serious in 2004 after a short winter break I was selected onto a Para-Olympic Panel as a Tandem Pilot for Athens with Philip Finnegan (Pilot), Denis Toomey (Pilot), Mark Kehoe (Stoker), Seamus Kelly (Stoker) and Billy Shanahan (Stoker). Now the fun had begun!! In February we headed off for a 2 weeks of intensive Time Trialing and Training in Majorca and completed the Three Monasteries Challenge. In April I took part in a 26 mile Time Trial in Spalding with a 5 strong Tandem Team from Tandem Cycling Ireland. Mark and myself were third in our category. The other Tandems did very well and Ireland took the team prize. The next event was the Irish Blind Sports May Games. Seamus and myself were 2nd in the National Time Trial Championship and winner of the Blind Sports 25 mile Time Trial. Mark and Denis finished second on the Blind Sports Time Trial. In June 2 Tandems from Tandem Cycling Ireland took part in a weeks racing in Belgium. This was the first time that an Irish team had competed in this event. Seamus and myself, Denis and Mark did very well considering we were competing against Professional Tandem Teams including Once, Rabobank, German, French and Belgian National Teams. We finished 37th & 38th out of 46 teams. This week proved that the Irish were making a mark in Tandem Cycling in Europe. The next venue was the Manchester Velodrome in order to prove that we could qualify in the track event along with the road for Athens. Mark and myself completed a weekend’s coaching in order to prepare ourselves for racing 2 weeks later. We won our Match Sprint and Kilometre Pursuit.

On Friday the 11th June the official selection for Athens had arrived and I got the news that I had been selected for the official Athens Para-Olympic Team as Track Pilot along with Denis Toomey as Road Pilot and Mark Kehoe as Stoker for both categories. We would be flying out to Athens in September and from now the intensive training would begin. I have begun to solely concentrate on shorter distances for the track. My main event in Athens is the Kilometre Sprint. I hope to do Ireland proud in September with Mark and Denis, although it will not be an easy road from here to there, but will be manageable due to all the help and support from my Family, Friends and Sponsors. We depart for Athens on September 3rd, stopping off in Cyprus for two weeks training. Our competition dates include the Track on the 17th September and Road Races on the 26th of September.

Watch this space for more news from Athens.