What was your first introduction to cycling? [First Club, first races, first result]
My first introduction to cycling was when my dad bought me my first racing bike, a Raleigh Flyer 10 Speed. Then my uncle Kevin [Sheehy] won the Swords CC club League so I just had to join Swords CC and get racing. My first races were the Wednesday night Club League and my first result was in Ballyboughall in the League and that year I won the Under 14s league. 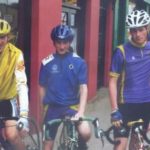 Being presented with one him many awards at the 2004 club dinner by club sponsor, Breda McNally

Your best Season?
Every season seems to be my best – at the time. I’m progressively getting better so I’d have to say this season [2004], got a few wins including some National titles under my belt.

Career highlights?
All my highlights seem to have been this year, gold medals in National Junior TT, 3KM Pursuit and 1KM on the Track, silver in the Points race and the Sprint. 1st Junior – CI Summer Track League at Sundrive Road. Winning the McNally Swords CC Club Road Race Championships and the Club 25 mile TT Championships. Riding for Leinster and Ireland, for the first time. All my goals for this year I achieved and more! What result / performance are you most proud of?
I’d have to say this year’s Club Road Race Championship. It worked out perfect for me; I’d been planning in the early laps where to make a break and trying to figure out how long I could last on my own. I seemed to have gauged it just right. I’m really happy I won it while still a Junior.

Rás [or Gorey] how many and best performances?
I haven’t done the Rás yet! This year was my first Gorey 3 Day. I finished 35th, it was an experience to say the least and I can’t wait to do it again and hopefully do even better.

Any good memories of the Park?
I’ve only raced in the Park twice, ‘crits’ aren’t my thing. This year I came 2nd in a junior ‘crit’ before the end of the Rás. I was pretty happy; I broke away on the line and was caught with two laps to go by Martin Munroe [Western Lakes CC]. The two of us then contested for the win, but I was pipped to the Line by Martin. [nice guy – good rider]

Memories of racing / touring overseas?
I have only just recently raced in England, it was the Track in Manchester. It was such a cool experience, even though I got ‘slaughtered’. I would love to go race again overseas sometime. When things go wrong!
The 2001 Community Games u16 Road Race. I had broken away with three other lads; Mark Nestor and Alan Coyle [Shannonside CC] and another fellow from Kerry. With about 400m to go the lad from Kerry touched wheels with Alan and brought him and myself down HARD! I was so annoyed – I was so close, I was feeling great and I ended up crossing the finishing line in the ambulance!! I never did find out his name.

Best rider you’ve ridden against?
(a) Sean Lally – he really is something special!
(b) Simon Whelan – though I rarely get to race against him… maybe next year.

Biggest influences in your career?
The biggest influences would have to be my parents without them I wouldn’t be able to race anywhere near as much as I do now. They’re my managers, financiers, nutritionists, transport, masseurs, and most of all my mam who washes my gear!

I can’t leave out the influences of Aidan Hammond without whose help and encouragement I would not have had such a good season this year. I adhered strictly to his coaching strategy throughout the year [it wasn’t easy! ] and it paid off. He knows his stuff and he’s a nice guy besides. Thanks Aidan! Selected to ride for Leinster with clubmate Keith Daly

Favourite present day pro?
I have a few favourite pros. I like George Hincapie, probably because he’s just a good tough cyclist, and he’s cool. I also like Andreas Klöden & Ivan Basso, these are the guys I believe who could beat Lance and are future Tour winners.

Favourite pro sprinter?
Alesandro Petacchi, he’s just so cool, a bit like ‘Cipo’ but not as ‘showy’, he just gets the job done.

Race day nutrition?
I usually have cereal, toast, banana, & orange juice for breakfast. On way to race I’d have energy bar and 1 full bottle of energy drink. Then in the race I’d have 2 full bottles of energy drink, gels, and a bar [Power Bar of course!!]. After race I just have water and maybe some pasta or suchlike just to fill me up again.

What do you love most about cycling?
I love everything about it – I like being part of a Club. I like the racing [and sometime even winning), bike mechanics, watching it, the ‘laugh’ you have at the races & the friends you make along the way. 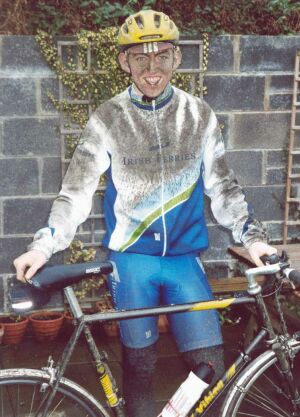 Thanks mam… for washing my gear!

Interested in any other sports?
I do a bit of running in the winter. I’ll watch nearly any sport on TV. I like motor sports and extreme sports.

Favourite Cycling magazine.
I like both Pro Cycling and Cycle Sport, I’m a real ‘tech head’ and both of these are great for showing all the latest gear.

Best cycling books you have read?
“Chris Boardman’s Complete Book of Cycling” – the title sums it up.

What advice would you give a first year racer?
Just try, try and try again. Try stuff out you can only learn from your mistakes. It’s very important to listen to advice from other older riders. Some riders have forgotten more about cycling than you’ll ever know. They know what they’re talking about.

How can they turn good performances into good results?
Just keep at it. Put in the miles. Eat and rest well. Watch others, learn from them and you’ll pick up the tactics. Be patient, it takes time, when it all comes together you’ll be getting results no time.

Favourite cycling holiday destination?
Gran Canaria, the mountains are magnificent and the roads are great. The heat is a real ‘killer’ unless you go out at dawn – like I had to.

Most enjoyable tour?
I don’t really tour much. I enjoy the spins on Saturdays up over all the hills, a good spin, gets in a bit of everything. I’ve enjoyed the Wicklow 200 the two times I’ve done it. 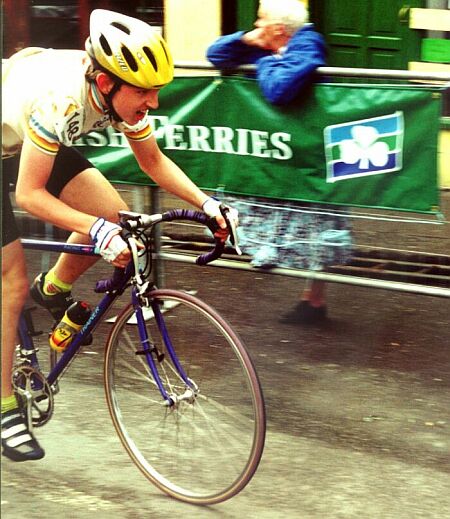