Introduction
On behalf of the McNally Swords CC committee I would like to wish everybody a happy new year. Once again it is the time of year to renew ones membership and full details of the amount due is listed. The club membership form for 2005 in included with this newsletter.

Membership for 2005 Season
The good news is that there is no increase in the annual membership fee which is required to be paid before January 31st 2005. The membership meeting will take place on Monday 31st at 8.00 pm in Fingallians and enclosed please find application form. Note that all members of McNally Swords Cycling Club must register with either Cycling Ireland or the Irish Veteran Cycling Association.

In addition, in order to enable our treasurer to manage the membership fee more effectively, those who use cheques must write two separate cheques (McNally Swords CC and Cycling Ireland or IVCA). Membership forms should be sent to Breda McNally, Walshestown, Lusk, Co. Dublin 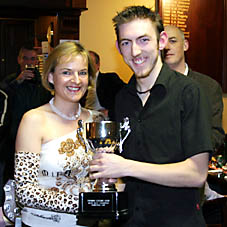 Note: 25€ is deducted from first item for all club members.

The Irish Veteran Cyclists Association Leisure League 2005
This is a 10 round series primarily but not exclusively for leisure and touring members. The events are not competitive and are designed to encourage members of all abilities to take part.

Each event is controlled at a leisure pace with points awarded for participation. A perpetual trophy is awarded to the cyclist with the highest points at the end of the series. Tommy Markham usually excels in this league.

The first three tours are as follows:

For further information on the Leisure League contact the Leisure Director on 087-2579406 or on the web site www.ivca.info 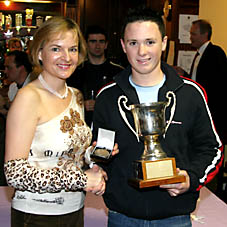 Swords riders fare well in Christmas Races! (by Hugh Byrne)
You can always tell when the Christmas Races are approaching as the tempo rises ever so’ slightly’ on the club training spins as those who have been training for the 2005 season try for a mini-peak in form (not forgetting trying to put a bit of meat on the table for Christmas!)

The first of the series was our own Invitation Race. This was run on the Boot Inn circuit with the Vets group catching the U16 group and all working hard to stay clear of Scratch. Pat Halpin attacked an got clear with a lap and a half to go. It took quite some time before he was reeled in and on the last lap he attacked again (in the same spot), but this time the bunch weren’t going to give anyone a head of steam! Had Pat saved his attack for the last lap, the result might have been different, but it was going to come down to a bunch sprint as long as Scratch could be held at bay. The gallop was won by Terry Ferris (Murphy-Gunn) from Sean Lally with our 2004 League Winner Stephen Halpin 3rd. Second place for any sprinter is always the one that hurts the most, so this was the trimmings sorted , two more races to sort out the turkey! Strangely if you look at the Dave Blake’s photos of Terry winning you can see everyone in the first 6 except Sean, and they say the camera never lies! Alister Cole won the sprint from the scratch group showing that is continuing his fine form on which he finished the 2004 season.

The next ‘social’ gathering was the Obelisk/Ravens Race and this was run over the Batterstown / Green Sheds circuit. All groups were together with 15 miles to go and there were plenty of big guns in town. The riders had to battle against a strong headwind on the run in and it made it less likely that anyone might escape. Still riders went up the road in ones and twos and all moves had to be covered by the ever attentive sprinters. For the second week running our soon to be Juniors Stephen Halpin and Michael Daly were well up there mixing it with the best of them. This was most definitely going to big a big bunch gallop and as it was into a headwind no one would want to lead this one out too early. The slightest of stalls by the bunch with about 800 metres to go was greeted by an instant attack of devastating acceleration by Keith Daly which gave him such a gap that he was able to hold off the whole bunch to line to win by a couple of lengths. Sean was pipped for 2nd (still no turkey!), but the day belonged to Keith who won with the sweetest of moves, requiring all his talents a sprinter to get clear and his talent a great rider to hold them off.

The last of the Christmas Races was the John Sweeney Memorial (hosted by Dublin Wheelers). From the gun, hard riding form our own Pat Halpin and Dublin Wheeler’s Sé Weston made it less likely that scratch were going to get up in this race, but it also blew their group apart reducing it to six riders incl. Sean Lally, brother Jimmy, Mick Rock, and Darren McMahon (Cycleways). These six worked together catching the earlier groups. Pat Halpin once again showed the ambition that comes from getting his first big road win this season, and probably fuelled by having his son Stephen snapping at his heels (or is it the other way round!). Pat attacked an got clear with a few miles to go and for a while looked like he was going to win it until Sé Weston went in hot pursuit with about a mile to go. It was still touch and go whether he would catch Pat or not but when he did and passed him it took a huge effort from Sean Lally to get back on terms, but as far Sean was concerned it was ‘all in’ ………win or nothing! Forced now to lead it out, he caught Sé and managed to hold off Terry Ferris (the Rematch!). Christmas Dinner sorted! Also for the third week in a row Micheal Daly (4th) & Stephen Halipn (6th) were well up there, showing great form and gaining invaluable experience. This win was extra special for Sean as John Sweeney, in whose memory this race is run, was an ex clubmate of Sean’s and someone he knew well and of whom he had high regard.

Anyway Christmas Races over and plenty of Swords names well up there!