What was your introduction to cycling? (First Club, first races, first result)
I started cycling after watching Sean Kelly on RTE’s 15 minute highlight program of the 1984 Tour de France. I really got into it after doing a school cycling trip to Brittany in 1987 and joined Lesjeunes CC in 1988. My first race was a club race that year when I cramped 100 metre from the line and fell off!!

Your first big win?
Are you taking the piss?
I have won 2 races in 17 years. Both club races one in 1989 when I whipped “smelly” Darcy in a 3 man sprint (Paddy Moriarty was 3rd but as he was about 14 and on restricted gears I can’t really brag). I also won a Swords club race a few years ago.

Your best season?
In terms of racing probably last year when I got a couple of placings in open races and got the phenomenal amount of 2 points (first ever).

Career highlights?
My best memories cycling are of Saturday morning spins with Swords and also with Toyota North Down CC on warm sunny days. Finishing 8 Wicklow 200’s also stands out.

What result/performance are you most proud of?
I have no real results to speak of but aim to break the hour record for riders over 100 in 2070.

Any good memories of the Park
The park race are good fun. I have a good picture at the front (almost) and placed well in duathlons in the park in the early 90’s. 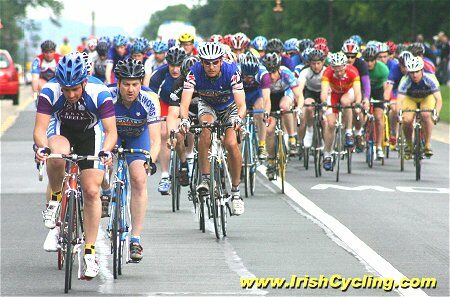 Memories of racing (or touring) overseas?
I have toured in France twice . Both were brilliant especially around nice in august 1993 ( on money I borrowed from the bank for living expenses for the college year!!)

Best rider (amateur) that you have ridden against?
I am lucky enough to have ridden alongside Sean Kelly in the Wicklow 200 but among amateurs Sean Lally, Julian Dalby, Paddy Callaly, Paddy Moriarty and Mark Kane all stand out. The most impressive however was Alistair Irvine of Toyota North Down. He won 2 commonwealth games medals in the late 80’s and early 90’s and has the biggest thighs I have ever seen . His Ability to go to the front and keep it at over 30 mph for mile after mile is amazing.

Biggest influences in your career?
I see cycling as a lifestyle choice rather than simply as a racing career. Dedicated club men like Ritchie Beatty (LesJeunes) , Harry Adams (TND CC), Gay and Kay Howard (Stamullen CC) and the likes of Terry Quinlinn, Sean Lally, Hugh Byrne, the McNally’s, Johnny O Sullivan, Fred Harte, Pat Halpin, Mick Daly, Kieran Whelan and many others at Swords all are sources of inspiration for their dedication and support.

A Favourite present day Pro’s?
Up to a week go was SuperMario but now he has retired it has to be Jan Ullrich. He is an unfulfilled talent but has an impressive palmares and seems to enjoy a life outside competitive sport. Its makes for a less successful pro but a more balanced person.

Of all cyclists there was a guy called Hubert Opperman who rode the tour in the 1920’s, spent the 30’s doing long distance time trials, fought in WW2, Spent the 50’s and 60’s representing his country (Australia ) as an ambassador and only stopped cycling in his late 80’s. To me that is a perfect career.

Favourite Pro sprinter?
The one and only Sean Kelly.
The only cyclist I have ever seen have a fist fight at 40mph in the finale of a TDF stage (?1984 with Eric Vanderarden)

Best one day Pro race? (Flanders? Parix Roub , Milan San, W/champs)
The Tour of Flanders. A true test of all round ability and as hard as they get.

What do you love most about cycling?
The feeling of mental relaxation and focus when you are at your limit. Its an odd feeling but when you are going well nothing matters but maintaining your effort. It allows you to forget all the everyday troubles.

Interested in any other sports?
Football (well the approximation that Liverpool have been playing for the past 16 years). I also play golf well but find it incredibly tedious. Triathlon is a good event and I enjoy (to an extent) running. 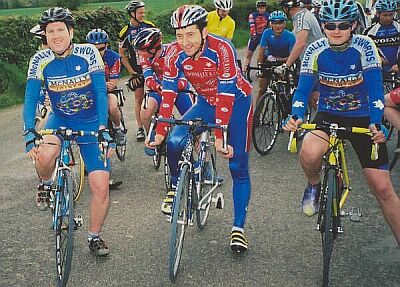 Myself and Gerard Cromwell (Stam MD), editor of Irish Cycling News and Michael Daly one of our talented Juniors

Best Cycling Book(s) you have read?
Paul Kimmages Rough Ride. Its the story of a bloody good amateur who did not quite make it as a pro. In my opinion the drugs admission pales into insignificance compared to what the pros in the early to mid 90’s were taking.

What advise would you give to 1st year racer?
Race to enjoy it. Cycling is fun. Don’t focus too much on results or winning.

How can they then turn good performances into good results?
Once you feel you are good enough then the game changes. To succeed in cycling you need good physiology and mental strength. You need to set goals short, medium and long term. Every training spin should have an agenda. The ability to become focused and visualise targets is essential . Mental strength is probably the most important factor at elite level. (that said if you do not have the “engine” the no amount of mental strength will make up for it).~
In short get a coach!!!!!

Most enjoyable Tour (non racing)
The north down Coastal challenge (Would have been the Wicklow 200 but too many f******* hills). 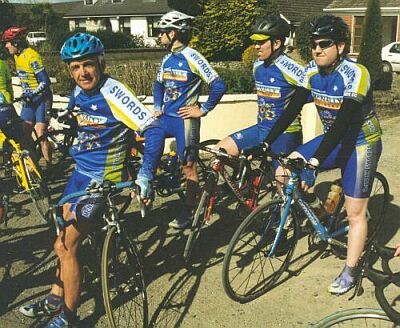