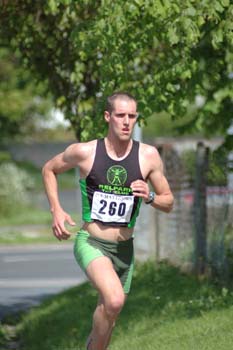 The Triathlon is a huge event on the Limerick Triathlon Calendar and is held in memory of Limerick Triathlete and “Ironman” Joey Hannan who was tragically killed while training on his bicycle almost 15 years ago. But the memory of Joey grows stronger every year and the numbers of long standing athletes coming back year after year show how much Joey was loved by so many people.
This year we had a record entry of 200 competitors, double the figures of last year.

Competitors travelled from all over the country to race against each other and pay tribute to Joey, with many of Joeys old friends making huge efforts to come down and race on the day.

The swim starts went off in 6 separate heats according to speed with the final heat being made up of the some of Ireland’s Top Triathletes including International Pro Caroline Kearney from Dublin and Belparks’ Brian Crinion who is showing great form in 2005. Limericks own triathletes were also out in fine force, with Lisa Horgan, Shane Scully, Brian Jenkins, Mark Dempsey, Mark Higgins, Barry Kent, John O’Shea, Liam Butler, Liam Liddy and Noel Higgins all looking for a top 10 finish.

International Caroline Kearney showed great speed in the swim clocking the fastest time, with Mark Higgins and Lisa Higgins-Horgan coming out of the water in second and third respectively. 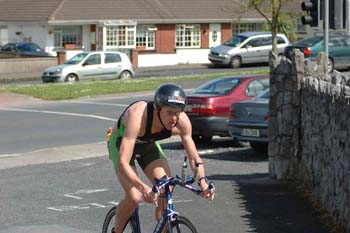 The windy weather played a huge role in the race by making sure no athlete had an easy time on the 32km cycle leg out and back the Killmallock road. Athletes battled into the energy sapping north-westerly breeze on the return leg to St Enda’s. Many triathletes came in exhausted after the cycle leg, but drove on and started out on the 2 lap 8km run leg of the race. It was Brian Crinion who after exiting the pool in 11th position “eat” up road on the cycle and passed all 11 athletes in front of him, exhibiting impressive power on the bike. Mark Higgins and Caroline Kearney followed in some minutes later ahead of the rest of the competitors. Coming into the transition area in 4th, 5th, 6th places was Jenkins, Scully and Dempsey. The run was to be the deciding event of the day with the chasing group of the three above overtaking Kearney and Higgins. Crinion held off the opposition with the fastest run split of the day, with West Limerick AC’s Joe Chawke posting the second fastest run time of the day. It was a great event that was enjoyed by all the spectators and participants.

Everyone’s enthusiasm was a tribute to our never forgotten Triathlete, Joey Hannan