An exciting weekend of racing was had by all in the Bertoni Gorey 3 Day with Sean Rock trying to add his name to the list of greats who won this race before his inevitable promotion to the A Category, and Stephen Halpin also trying to make his mark as part of a very strong Irish Junior Team. Our Club Team also had the benefit of the experience of Sean Lally riding in his 151st Gorey and the backup team of Pat Halpin, Mick Daly, Terry Quinlan and Kieran Whelan. Our other riders were Michael Daly, James Whelan, Sam McArdle and Kevin Donagher riding in his first major stage race. Kevin was riding in the Leinster colours as just reward for his early season good form as he moves swiftly through the C grade.

The first stage saw Sean Rock get into a 4 man break just before the halfway point and stayed clear for over 30 miles. The gap never went over 1 minute and was pulled back with less than 3 miles to go. Stage 2 was a short time trial with the wind picking up and favouring riders who went off later. Former club member, Tony O’Malley did an outstanding test against the clock to take this stage but was unfortunate to find himself missing the big split in the bunch on stage 1 and missed out on yellow. The lead was taken by Declan Byrne (Orwell) from Sean Rock in 3rd at 11 seconds and Stephen Halpin 5th at 18 seconds. These time gaps in the overall were solely down to the TT .

Stage 3 saw Sean once again go clear with 2 laps to go with Adriaan Pretorius and at one stage Sean was in ‘yellow on the road’ when the gap went to 1 minute. Things were looking good when these 2 riders were joined by another 10 or so riders at 5k but once again the bunch reeled them in 2k from the finish.Stage 4, the final stage, usually comes down to a bunch gallop and Sean thought that he would save some energy for this and try to put his name on a stage. Stephen Halpin has other ideas!!!. From the gun, Stephen and Irish Junior Teammate Isaac Speirs, got into a 12 man break and this looked dangerous to the yellow jersey as Isaac was 4th on GC at 13 sec and Stephen a further 5 seconds back in 5th. The Orwell lads rode a cool race under the expert guidance of Aidan Hammond who called it, that it was best to leave the break out there but not to let it get beyond 2 minutes and obviously other teams would also assist in the chase in pursuit of the stage when push came to shove. He got it right and once again the break was pulled back within the last few miles but not before Stephen tried to break clear on his own in pursuit of the stage and possibly the overall. Sean Rock was beaten into 2nd place in the massive bunch gallop and Declan Byrne had defended the time gained in the TT to take the Overall with no time gaps lost or gained by the main players since Stage 2. The race finished with Sean 3rd on GC at 11 seconds and Stephen 5th @ 18 seconds. Sean also picked up 3rd in the KOH and 3rd Points.

Sean’s next major outing will be the Tour of the North on the May Bank Holiday weekend, where points gained on his license this w/end will see him compete as an A cat while Stephen will be riding that weekend on the Irish Junior Team in the Corkman 3 Day.

Special mention also to Colm Crawley (Stamullen MD) who stayed with the Swords lads in The Gorey and placed well in the gallop on 2 stages. Also special thanks to the sponsor Eddie Lynch and Bertoni Menswear for a more than generous prize list and to Shane Stokes & IrishCycling.com for their excellent coverage of the race. 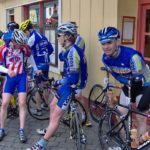