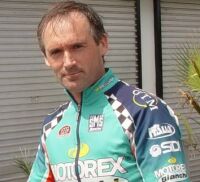 Career highlights?
Apart from those in previous question, riding in races like, Benedictine Road Race, Perf Pedals, Yorkshire TT Champs & Road Race champs, Eastway circuit 3 times. At the time these included some of Englands well known riders, who were at the top of the sport, the likes of, just to name a few(Griffiths,Downs, Longbottom, Phil Thomas, Joe Waugh, & M Elliott, before he went pro. These were good grounding events, especially when you had riders of the calibre above.

What result/performance are you most proud of?
Apart from the 12 hr & the 1980 season, my TT PB’s would have to be my most proud moment, considering back then there was no low profile machines with disk wheels etc. Outside of this the 1982-83 season (can’t remember exactly), But rode many of the big races in Ireland, i.e. Des Hanlon, Tour of the Slade, Gorey 3 day, Coast to Coast, Liam Toolin. (Most of these races where 80-100 miles then) + Many more. & managed to finish in all of them.(those were the days)

Any good memories of the Park
I loved racing in the park, (the old 2 mile circuit) was fantastic before they put the stupid eagle monument where it is now. Sunday events held in the park were great, huge big fields, & some real big names. (sound like me old fella). Kipper McQuaid, Aidan Harrison, Se O’Hanlon, Martin Early, Kimmage brothers (Paul & Raphael) the Lally Brothers Sean, Tony & Jimmy , Brendan Madden, (& could they sprint then) If ya wanted to see a sprint finish here was the place, On the main Road of the Park with Tony Lally or Sean, (riding in the Kalkoff colours) do ya remember some of them Sean? 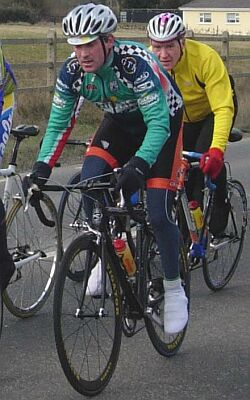 Photo in 2006 a pre-season race by John Heery

Memories of racing (or touring) overseas?
I rode in an event in Paris in 1978 as part of the French & British cycling Federation Centenary & won a silver medal in a RR. Rode a Randonneurs in 1977 (300 km) & another Randonneurs in 1979 (400 km), remember feeling completely knackered. After returning from the 1978 event the guy who was doing support for the riders put their bikes on the roof rack & my bike in the boot, & driving down the motorway from Dover, he had only forgotten to secure the roof rack down & the whole lot came of the top of the car & was crushed by a lorry behind. I was delighted my bike was in the Boot.

When things go wrong (Or the one that got away)?
Always blame the Bike or someone else. No seriously, I don’t try to analyse things to much (not anymore anyway) I Just enjoy the sport for what I can do now.

Best rider (amateur) that you have ridden against?
I guess I could say I have been lucky to ride with some well known riders from the past (as those I have already mentioned above). But most of them no longer ride anymore & some are no longer with us. But I would have to say for me, Sean Lally, would stand out foremost in my mind, for his enthusiasm, dedication, & years of commitment & over the many years I have known Sean he has always been very helpful to me, with his help & a wealth of advice. (“A great Ambassador for Irish cycling”)

Best Irish sprinter you’ve competed against?
Without question has to be Tony Lally. Used to do intervals with Tony in the park at lunch time, back in the 80s. Would need to take the rest of the day off, just to recover.

Biggest influences in your career?
My father firstly. But I was a big admirer of Tom Simpson (never met him) but he didn’t live to far from where we lived in Yorkshire. Another rider I knew was the late Arthur Metcalf, brilliant rider. & last but by now means least the great late Beryl Burton. (Morley CC) I once rode a 2up with Beryl on the Boroughbridge road did a 52.?? (1979) I was hanging on for most of it, I must have had the cleanest tubs at the end of the event, due to my tongue hanging out. I would sometimes meet up with Beryl & her husband Charlie & would go around Ilkley moor training together. (My father has a track frame once owned by Beryl Burton). 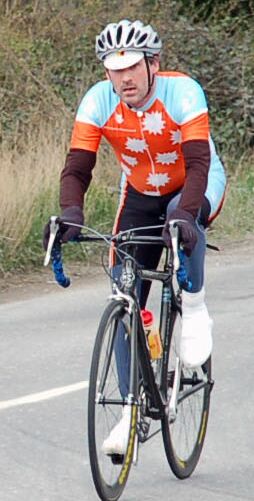 How long with Swords & why you joined (or why you stay)?
I was with Swords CC last season & in 2002/03 Lovely club & people in it. Over the winter I was contacted by the club I rode for in England back in 1976 & was asked if I would ride for them in Ireland for the 2006 season, (as the numbers in the club have declined over the last couple of years, & there is little or no one racing in the club, mostly touring at the moment) It is mainly a sort of PR to try & get some interest from some current members & hopefully new members to take an interest in the racing side. So after several telephone calls & some discussion I agreed to give it a go, on the basis of 1 year. In the past they have had a National Cyclo-Cross Champion on 2 occasions & a National Track sprint Champion.

Favourite present day Pro’s?
I don’t seem to have favourites (never have) but I would like the current crop of Irish riders to do well.

Favourite Pro sprinter?
Again really don’t have any. I can’t sprint, never could, never will. But I love the climbers, Pantani was very gifted, liked watching him.

Race day nutrition (Breakfast — mid race drinks — recovery etc)?
Depending on the race distance, if its only 45-50 mile, I will carbo load 3 days prior, (with glycoload drink, pasta, rice) on the morning of the race 2 bananas + 500mil litre, energy drink, after race recovery drink of 500 mil litres (Glycoload)

What do you love most about cycling?
Other people involved in the sport, (we all have something in common) Some of the tales, stories Old & new & always like Sean Lallys Jokes.

Interested in any other sports?
I love all sport, (except golf, cricket) the commitment & time that each individual has to put into his/her sport has to be admired, no sport is easy.

Best Cycling Book(s) you have read?
Put me back on my bike (Tom Simpson story).

The story of, Marco Pantani, rise & fall of

What advise would you give to 1st year racer?
This I feel depends on what age you are when you enter the sport. But If you are in a position to try all aspects of cycling, i.e. (cyclo cross, Track, TT, & Road) do it, do not limit yourself to One aspect of the sport, you may find you have a better talent for some other part of cycling. Get Advice from the guys who have been there & done that, but enjoy what you do.

How can they then turn good performances into good results?
Its about getting the balance right from the very beginning, good foundation/training, good advice, good diet, & be realistic with your aims & goals, & don’t beat yourself up over results. If the talent is there it will come.

Favourite cycling holiday destination?
Have to say, Italy, was there last year for a week with my aunt in Petra Liguria, Genoa, fantastic weather, food, & women, good cycling to.

Favourite tea stop
I mostly train alone, but when I have met up with the guy/ladies from Swords, I like the garden centre in Clonee, (it’s near to home for me) I like Tara also.

Most enjoyable Tour (non racing)
IVCA have some nice tours (I think that’s what they are supposed to be) enjoyed the 50-in-4 recently. 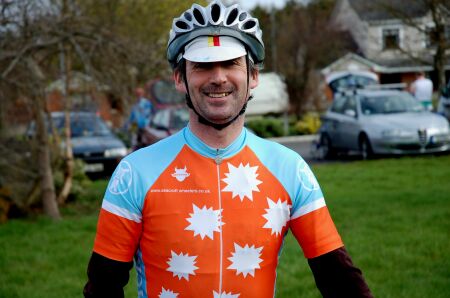