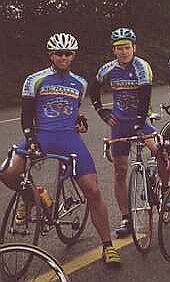 Simon Whelan and Gearoid back in 2002

Some of our newer members may not know Gearoid, but he was rider of good standing in our Club up to when he moved to live in Sardinia a little over a year ago. His roots in cycling were in Sean Kelly country but joined Swords when he settled in Dublin. He always had a no nonsense approach to cycling, trained hard and rose through the ranks to A cat and was our Club Rider of the Year in 2002. I have heard much from Gianni (affectionately known as ‘the little Italian’) about his days racing in Sardinia and always thought he was ‘bigging it up’, but from the sounds of it ………….perhaps not!!!!! Most of you have come across Gianni at some stage on the roads around Batterstown and I hope to do an interview with him at some stage. Gearoid has promised to write some articles from time to time on the amateur scene in Italy and let us know how he gets on when hostilities commence. Many thanks to Gearoid for taking the time to write the article and we look forward to hearing from him again.

Ciao a Tutti, In response to Hugh`s request for more rider articles for the coming season I offer you this brief insight into training here on the Italian island of Sardinia.

My first impressions when I got here over a year ago now was the huge amount of cyclists that were actually on the road. When driving to and from the city (Cagliari) at anytime of the day or year it would be impossible not to pass numerous bunches of cyclists of all ages out for a spin. It cuts a contrast with the often solitude figure I would pass on a bike on my way to work in Dublin. I have been told that cycling was the number 1 sport here in the 50`s and 60`s (Moser era) and was only surpassed by Calcio (soccer) in the mid 70`s. Even today, the national daily sports newspaper (La Gazzetta Dello Sport) has its cycling articles immediately after the soccer reports which tells us a little about its importance here.

After my delight at seeing the sheer numbers of cyclists around when I got here I had been very eager to get to involved in the racing scene but had to postpone it until this year as things were very hectic when I arrived first and the bike had to be sidelined for a while. I started training in December on my own as I was wanted some very basic level of fitness before I got in with the locals (did`nt want everyone getting cold waiting for me). In January I started meeting up with a local group (up to 60 on a Sunday morning) which were doing 4 hours on Sat & Sun and 3 x 2 hour spins midweek so this was the perfect amount of training for me.

The training sessions are a mirror image of the Italian way of life – chaotic! There is no formation, no up and over, variable speeds, numerous attacks and the minute they see a hill all hell breaks lose. For example yesterday (Sunday morning spin), about an hour into the spin, two monsters go to the front and for a solid hour belt out a tempo which had the rest of us (about 40) hanging on and afraid to say anything for fear of being asked to do a turn. We then turn into an strong headwind, these two guys decide to relax a bit and then this other fella takes off and for the remainder of the spin it’s a line-out.

Within any training session, it’s the strong guys who tend to dominant the tempo and the rest of us will just tend to stay out of the way with no obligation to do a turn at the front. If you feel ok then you just go to the front and do a stint till until someone else comes up (you could get caught for 10 mins) and if you don’t feel so good then you are expected to sit-in. While the training is chaotic and completely unorganised, I must say that I’m enjoying it as you never know what is going to happen in any particular session which makes it exciting. I had expected the complete opposite when I came out here as this is after all the worlds number 1 ranked cycling country and you would have thought that the training structures would have been well taught out and supervised to some level. However, maybe it is this “do as you feel” style of riding that is producing the top guns such as Basso, DiLuca, Simoni etc.
As regards myself and how Im coping with the training, I find it hard. I’m ok on the flat but when I hit the hills I tend to go a little bit south from the stronger guys. I can ride over the longer ones (10k to 15k) with the main group but this would be 5 to 6 minutes off the first group. I can nearly hang in there on shorter climbs but it’s a real struggle (head sideways, mouth open type). It is impossible to gauge anything yet as racing does not start until early April and that will tell a lot. I have been told that the hard men come from the mountains up in the centre of the island so God knows what they will be like. The region of Sardinia would not be one of the stronger regions within Italian cycling and is only producing a handful of pros (3 at the minute) so I would be fearful of any of the trips to the mainland that the clubs organise. The North of Italy especially the regions around Tuscany are the powerhouse of Italian cycling – a lot of the pro teams are based there.

I’m not exactly sure of the race formats either – some guys have told me that everyone is in together but I’m not sure what this will include. Im classed as Master 1 (older than 32 years) for racing. Im joining the local club here where I live called “Mare & Mountane” which translates to “Sea & Mountains” (you could leave out the mountains bit for me). One thing which I thought was a good idea here is a compulsory medical for all persons taking out a national licence given the physical strains of the sport.

Anyway, these are my first thoughts on cycling here in the Med but I will share more with you throughout the season when the racing starts and the famous “fuse-like Italian temper) kicks in around mid May when temperature starts to rise.