After weeks of practising throwing the hands in the air (using a pair of stabilisers in the front garden) for when we passed the finish line with the other girls sprawled out behind us, we were ready to take on the ladies 2 Day ‘Ras na mBan’ . Some gentle coaxing by manager Pat Halpin ensured that we all got to the start line on time with enough Power Bars and Gels to keep a donkey awake for three days. We had three stages to complete, a 60k crit, a 2k time trial and a 72k road race. The race was neutralised though Balbriggan, where some lads thought they were seeing things, 70 tanned girls in tight lycra whizzing through the town. We were off at the Huntsman pub where things heated up after a guided tour of the potholes of the first lap. I lost contact pretty early in the race, with the rest of the girls, Coleen, Emma, Norah and Caroline still with the bunch for the next few laps. I had decided that the pressure was too much and retired to a more leisurely pace with a group of girls, politely roaring at everyone to get up and over and do some work.

With two laps to go there was a bad crash, Coleen and Emma took the softer option of landing on the bank and on top of Valerie, before scrambling up and away again. Coleen discovered that alas, her chain was off, and frightened some poor random punter into fixing her chain with a roar of ‘where’s my f******n support?’ Some other scared lad even gave her a push off. Thankfully no nails were broken in the incident. Caroline had avoided the smash by swerving to the left, Norah managed to avoid it too. Caroline had a great finish in the bunch with Emma, Coleen and Norah not far behind. Back to the sports complex for massages and grub and then it was time for the 2k time trial up the hill with thoughts running through our heads ‘why are we doing this? ‘Team dinner that night in Skerries where management did not object to the team members having a few well deserved glasses of wine.

We had been betrayed by a certain member of the club who decided to assist another team. We wondered why until after the finish of stage 1, the ladies in question decided they were too hot and whipped everything off at the finish. Swords ladies being a bit more modest and waited until they got back to the shelter of the sports complex. The national flag of the team in question had been hanging out the back of the team car window, to be later blown off, clocking a few girls in the process, driven over by 2 cars and then had to be rescued by the manager’s assistant. We did not mention the war. Back through Balbriggan for stage 3 where we decided to head off with the A’s at the last minute, forfeited our chance of kicking ass in the B race (good call by Emma). I managed to stick with them until Ardcath with the others faring much better and hanging in over the lovely Naul hill. I was joined by Siobhan from Lakeside Wheelers and a German girl. Working together we got to the finish ok, just a few minutes behind the others. A certain Mr Rock was disappointed that there was no pucking at the finish. Grace (camerawoman extraordinaire) nearly got ran over while trying to capture the finish from the hard shoulder, avoiding a crash by a nimble hop into the ditch. 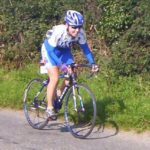 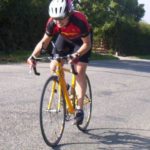 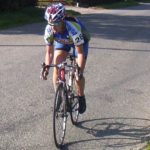 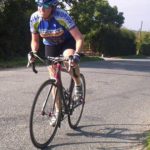 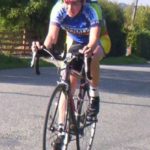 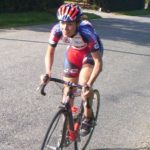 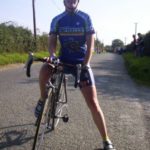 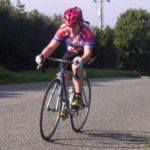 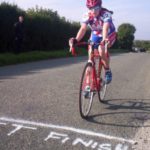 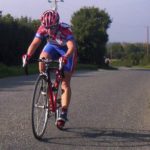 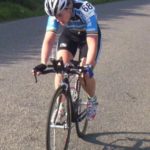 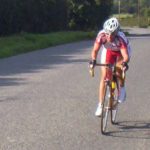 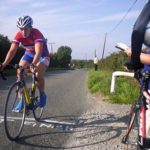 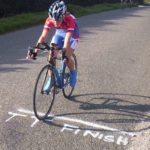 What better way to recover after two days of hard slogging on the bike than head into town for a few drinks and a Ceili. Excellent trad music, a buffet and we danced and danced until we could dance (or move) no more, proving that we could give Riverdance a run for their money.

Poor Oliver Mc Kenna, arrived to the ceili a wee bit pale, shocked at the language on the tape while playing it from the comfort of his living room. ‘Bernie get up the f*****n group NOW!’. He muted it for the ladies on the bus to watch on the way into town. Grace made up for the language by capturing a horse frolicking in a meadow while waiting on the bunch to arrive for a prime, having to be dragged away from trying to film a cow calving and to focus at the task in hand.

A big thank you to Pat Halpin, our manager who provided us with a smile and a protein shake at the end of every stage. Alister Cole, team mechanic/maniac, who took care of the bikes. To Stephen Mc Kenna, who was there when we needed him. To Valerie and Louis for organising a great weekend and a great race, maybe they can organise it so that we win next year. A big get well soon to Martina Kelly, who no doubt will be back on the bike soon, attacking those hills and kicking Matt’s ass.

The race was won by Stephanie Gronow from RG Charlottenberg, Berlin 2 seconds clear of Louise Moriarty from Moving Ladies who won both Road Stages, and placed 4th in the TT / Hill Climb. Super performance Louise!!!!