Last weeks trip included 4 riders from Swords including Colm Sevatapulo who had been in Manchester from the previous evening to partake in the Velodrome Track League and rode who rode with some distinction taking a win in the 1km dash. Apart from myself we also had Stephen & Sean Halpin on the trip. Neither Sean or I had ever ridden on the boards before and in fact Sean had never even ridden a track bike at all. Despite this we all had a go on the Sunday morning and managed to get around and stay upright!

Press Release Last weekend saw a busload of 30 Irish Track riders descend upon the Olympic size Manchester Velodrome to bear witness to the ‘best of the best’ of track take on an invited selection of Pro Tour road riders in a myriad of races featuring both endurance and adrenaline charged sprinting and with a full support card from the Junior Stars of the Future. Revolution 14 was a breath taking action packed night with 3 hours of non stop excitement.

The evening started with an Italian Pursuit featuring the Pro Tour stars. Two teams of 7 lined out on opposite sides of the track, with double Giro Winner, Gilberto Simoni leading out the team in the home straight. Perhaps unwisely the back straight team chose sprinter, Jimmy Casper to lead them out and he set off at a blistering pace which O’Loughlin could match but seemed to catch Discovery rider Yaroslav Popovych,who was placed third in the line out, by surprise. One by one the riders peeled off until Australian Sprint Ace Bradley McGee, gave his namesake Bradley Wiggins the perfect lead out to take the win for Simoni’s team against David Millar.

Next event up was a 200 metre TT as part of the Girls sprint Omnium. One by one the ladies set a flying 200 time with times in the mid 12’s until GBs Lucy Ayres set an electric 12.114 . But the best was yet to come when the final rider, World Junior Keirin Champion, Anna Blyth, blew everyone away with a blistering 11.59 to a rapturous reception from the sell out crowd of 3600. Indeed for the first time in its history, although always attracting large crowds, the Revolution Series was completely sold out. Surely the £10 admission must represent superb value for money!

Race followed race with hardly a pause in the action with points races, devils, 3 up sprints. There was also a 4 station pursuit featuring featuring O’Loughlan, McGee, Miller & Wiggins. McGee made serious inroads into Miller but O’Loughlan was closing on him ever so slightly and won by the narrowest of margins. A fine result for the rider against opposition with a lot more experience of the track.

Most impressive rider on the night was Anna Blyth, who followed up her superb 200 TT with flawless domination in the Girls Sprint Heats. Also a special mention German, Sprinter Tobias Wachter who rolled his tyre on the final bend but carried on sprinting. The evening finished with an epic 60 lap Elite Scratch Race with the riders strung out as the pace went up and up. After Miller split the field, Bradley Wiggins and Roger Hammond broke free in the closing laps until a third rider caught and passed them. Indeed it seemed to be down to the three of them until Adam Blythe seemed to come from nowhere to burst through for victory. And so an evening of 3 hours Racing ended as it started with breath taking excitement. Now early to bed for tomorrow it would be our turn to ride on the hallowed ground! 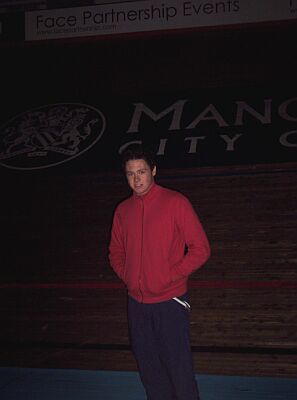 Sunday morning – crack of dawn!
Next morning we had hired the track for an all too brief session before we headed home. Some of our riders have notched up quite a few hours on the Manchester Track this year and indeed two of our party had travelled over a day early to partake in the Friday Night Track League. One of them Colm Sevastapulo, had even won the 1km dash on the night. A result which will almost certainly guarantee that he rides in the Elite section on his return! About half of our party had never ridden in Manchester before but a few hadn’t even ever ridden a ‘fixer’. Despite this, under the guidance of Will Byrne, everyone soon was on the 42 degree banking while our more experienced compatriots soared like eagles high up on the track! I had been told that the best way to get up and going on the Manchester Track was not to look at the banking from the top. Ooops!! It was the first thing I saw on the Saturday night. I just couldn’t believe how high and how steep it was. I just kept staring down at it repeating Oh ‘expetive deletive’! I have to say though, you have a completely different view when you are on it as the banking allows you to take the bends at high speed while staying perpendicular to the surface. It just take a while to get your head around it and it takes practice.

Upcoming Events
The next Round of the Revolution Series on Saturday 9th December 2006 Also the final round of the UCI Track Cycling World Cup will take place on 23-25 February 2007 in the Manchester Velodrome where competitors from over 30 nations will be bidding for individual and team titles in this the final round.

Many thanks to Will Byrne and Track Commission for organising what everyone agreed was a fantastic trip! Depending upon funding, the Track Commission hopes to organise similar outings in the future for anyone interested. 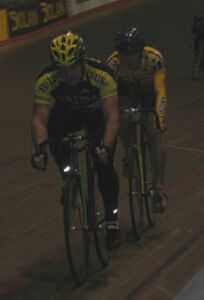 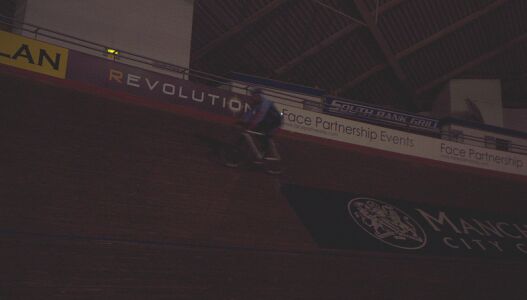 Yes, it is as steep as it looks!