Newport with the Track Paralympic Team

Met gang at the airport, including ladies Ailish Dunne, Nadine Lattimore and Catherine Walsh. Familiar faces Joanna Hickey and Aideen Collard joined myself as pilots of ladies tandems for the weekend, to give new riders the opportunity to join the squad. Boarded a “bus with wheels” sized airplane to take us to Cardiff. Packed all of us and our gear into a hired mini bus to take us to Newport. Niall Jenkins proved that he can read maps and drive at the same time.

Checked into the hotel and headed to Newport track. The stokers headed for an intense spinning class while the pilots had a spin on the track with some solo bikes. I was amazed at the sight of the track and could not wait to get on it. I was told no, I had to wait, I pleaded my Sundrive Rd. accreditation, but no good. I finally got out for a spin after the gang were finished, the track was cleared just in case I hit anyone. Off I went on the solo bike, building up the speed until I reached the blue line. A silent panic attack as I was not sure that I would make it around the first corner. Opened my eyes on the other side and realised that I was still on the track. An amazing feeling, flying around the track. An even better feeling was to be getting of a bike in January, not chewing muck or having to clean the bike. A much needed trip to Tesco, for rice cakes and lots of water. The check-out girls were very surprised to see a bus load of Paddies and not a bottle of beer in sight. Gerry Beggs and the bikes made it over that evening, after a stormy crossing. 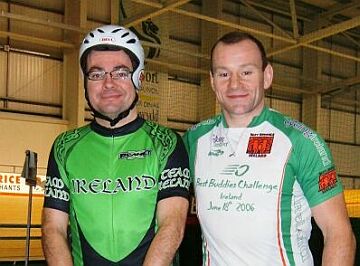 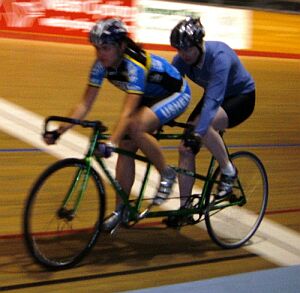 Over the next two days, we were on the tandems. The lads had a lot of trials to do as there were three different races. The ladies had a few spins to get used to the tandems. I nearly chickened out of the first spin. Once I got going with Catherine it was great, until I wondered how we were going to stop! Next were the ladies pursuits, Catherine and I against Joanna and Aideen. Aideen and I against Catherine and Joanna. Sat waiting at the start while the lady who kindly kept the times informed us of tandem crashes with limbs being broken. Not what I really wanted to hear before our first race. Thankfully we got around the first bend, having built up enough speed. Got our asses kicked both times, but it was still an amazing feeling! 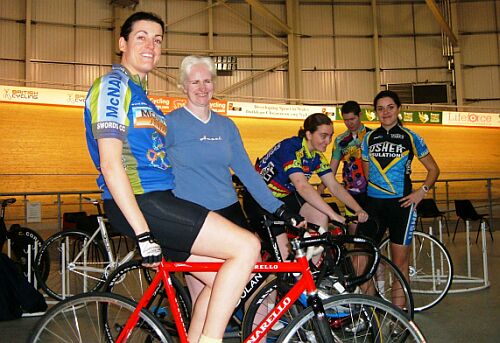 Bernie ‘pozes’ in front of the 42 degree banking!

All in all, a great weekend with the lads and ladies. A lots of effort and organisation and a big thank you to Gerry Beggs and Denis Toomey for all their efforts. Best of luck to the team in 2007, who have the World Championships to look forward to in August. The team needs sufficient funds in order to reach their goals of competing on a very high level abroad.