Batterstown: a win at last!

A win at last. Got stuck in the traffic heading for the evening race meeting at Fairyhouse and expected journey of 30 min from Blanchardstown by car turned into 75 minutes. Arrived just in time to run from the car and sign on the line and literally start the race seconds later. no warm up – no need !!! Nothing like being stuck in traffic to get the adrenaline flowing. Wound up to the last so attacked early which was brought back. Had quite a few digs on the two lap race, the last of which nearly succeeded when Susan O’Mara got across on Warrenstown but this too was pegged back. All these jumps ensured that I was well warmed up (despite the rain) for any sprint that was coming. I covered some early sprint efforts and ended up on the front. No panic, slow it down and ensure you are not in too big a gear. Basically a gear that you make make a sudden acceleration in. Everyone watching each other so I threw a shape as if going to launch which triggered Martin Farrelly to go. I got straight onto his wheel and used this a launch pad. Time enough to celebrate, and for Brendan Culleton to quite by chance get a photo which captured the moment. 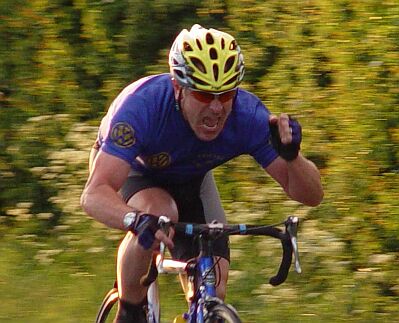