After last years the success of the Vets Omnium Demonstration event which was run last year as part of the National Track C/ships, our event was elevated to full National C/ship status this year. This years Championship was run as a 4 event Omnium with Sprint, 2k pursuit, 500m TT and a 20 lap scratch race. We started with the 200m flying TT which acts to seed the qualifying sprint rounds. Next was the 2k pursuit, definitely more difficult that it sounds!! This event is a fine line between gear selection & pace judgement and was more like an ‘unknown distance’ event for some of us. After lunch it was the qualifying rounds of the sprint which was run on three up sprints with the seeding decided by the 200m TT. Once again gear selection was crucial for this event and those who selected on the low side payed the price. We were treated to some quite exciting sprints with a myriad of tactics being deployed. First round losers were put into a repercharge to bring it to the last eight. After that it was 2 ups all the way to a 3 leg final, First leg of the final went to Aidan Ryan (Sorrento) who had earlier won the 2k pursuit. Ger Ivory (Bray Wheelers) levelled it and the ride offs for all other places took place before the deciding sprint which Ger took to level the Omnium with 1 event apiece. We just managed to squeeze in the 500m Standing Start TT before the rain came. This event saw Terry Cromer split Aidan & Ger, closely followed by Alan Neenan. Then as has been the case all year thus far………….the rain came!!! It was agreed to run the 4th and what will be the deciding event on the following Wednesday during the Track League. Coming into, the 20 lap scratch race. Aidan Ryan (Sorrento) was on 4 points accumulated with a win in the 2k pursuit and the 500m TT and second place in the Sprint. Ger Ivory (Bray Wheelers) was on 6 points after scoring a win in the sprint to add to a 2nd & 3rd place and would have some work to do to overcome Aidan. Two points also separated Terry Cromer and Alan Neenan (Usher) in what would most likely be the battle for bronze a further three points back. Alan knew to get into the medals he would have to ride aggressively as he would have to beat his rival and hope that Terry would lose at least a further place in the shake up. Alan took the initiative and went on the attack early on Brian Hammond’s wheel but this was closed down quickly, but as soon as Alan saw Terry in a position where he couldn’t immediately respond he was off again quickly building up a lead to nearly half a lap before Terry extracted himself while Aidan ignored this move and intelligently marked Ger Ivory. Terry quickly did the maths and realised that if Alan gained a lap, then he would have to win the sprint for 2nd to ensure his medal position and this was leaving too much to chance so he set off in pursuit. Alan worked hard to gain a lap while Terry became stranded between Alan and the rest, not able to catch Alan and not daring drifting back to the bunch while Aidan defended his position by marking any moves by Ger Ivory. It resulted in a very tough and hard fought win for Alan Neenan and an equally tough race by Terry Cromer defending bronze. Over the last few laps Ger gambled everything in dropping back to try to try to regroup a splintered field as he needed more than himself to beat Aidan to overcome the points differential while Aidan Ryan rode a cool and tactical race taking third which was more than enough to secure Gold with 7 points while the Silver had to be decided on countback as both Terry Cromer and Ger Ivory both on 11 finished one point clear of the hard working Neenan. In the case of a draw in an Omnium the winner is decided by adding the cumulative time from the time trial events. Aidan Ryan was duly crowned a popular and worthy champion. Also last week two of Aidan’s sons and Ger’s three daughters took part in the National U/age C/ships while Alan Neenan’s daughter Jenny (aged 9) had her first try on a track bike the previous week. So let’s not think of them as Vets, but more as the the fathers of our future track stars!!! 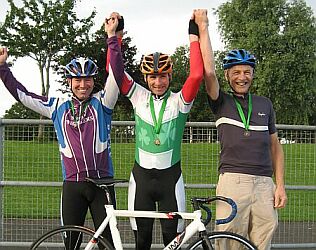