They often say football is a game of 2 halves, but I think the same could be said of Marathon MTB racing. This was a seriously savage day out, and was my first attempt at a National Championship Marathon event. The race started at 10am going up a road climb through Carlingford village, turning right into a narrow lane, and then immediately into the forest single track. I got a good start, which was important as there was 153 riders to get round the first tight corner. It was a wet & greasy morning, and there was a crash involving about 7 riders (thankfully behind me).Then it was all out war on the fire road climb, and up along the Tain way, then down through the woods, across a waterfall, and onto the Omeath road, turning left and heading for the top of the Windy Gap. Conditions got dreadfully worse the higher we climbed, with visibility down to a couple of metres at some points. The route was a mix of sheep tracks, narrow lane ways, and rocky descents.

Up until this point, I was having a good day, the bike was running well, and legs felt good. The inclusion some road sections in the route was really working to my advantage. I managed to stay in the lead group of 20 or so riders up until the halfway point, however I made a wrong turn on the rocky descent and ended up way off course.I had to ride an extra 20 km around the base of mountain to try and get back on to the race. As it was comparatively flat, my Swords league experience really paid off and a I made good progress in my efforts, and made contact with the race again, in around 20th position, just in front of the 3rd group. I rode strongly enough and held the gap, however I made another wrong turn again, and had to do an extra climb up the side of a bog track, to rejoin, this time behind the 3rd group. The descent was ultra slippery, buttery, and fast, down through the heather, and into Carlingford to the finish line.

All in all it was a tough event, made much more difficult by the bad weather, and the lack of signage/markings. As it turned out, so many of the competitors got lost, that the commissaire decided to withdraw the National Champs status from the event. Our league visitor Mark Allen rode an excellent race to claim 7th overall, and 2nd in his Category (Master).I managed not to throw the toys out of the pram (Happy Gilmore Style), and came home in 27th overall, and 5th in my Category (Expert), which wasn’t too bad considering. 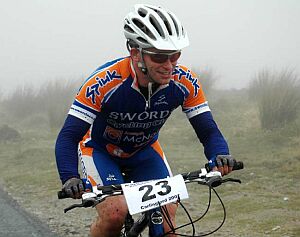 “Don’t get lost on the way down”

Many Thanks to Cuchullain CC for hosting the event.
Looking forward to next year already.
Now to wash the bike!!