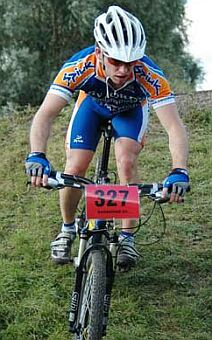 Just received news that Swords CC rider David O’Neill placed 2nd in the Experts Category of the Ulster Cross Country Mountain Bike Championships at Dunmore Mountain. The second half of the MTB season is just underway and this was his best result of the season thus far. He even felt that elusive win was within his grasp but for his chain coming off on the final lap. Obviously the conky nature of the circuits on our Club League had prepared him well and we wish him well for his next few races. This week he is up in Craigavon riding the final round of the Ulster League, and then competing in the MTB Marathon Nationals in Carlingford, the week after that.

One of the biggest shocks of the day was in the Experts race with well known road rider James McMaster (Dave Kane/Northern) performing as if he had been a seasoned mtb campaigner. In fact, many of Ulsters top Experts found the going too tough and retired as McMaster dominated proceedings throughout the five laps. Southern visitor Dave O’Neill (Swords CC) produced a strong ride to take second with Ross Blaney (Ards CC) taking the final podium slot.

Update 24th Sept:
The win finally came at last Saturday’s round of the Ulster MTB series in Craigavon