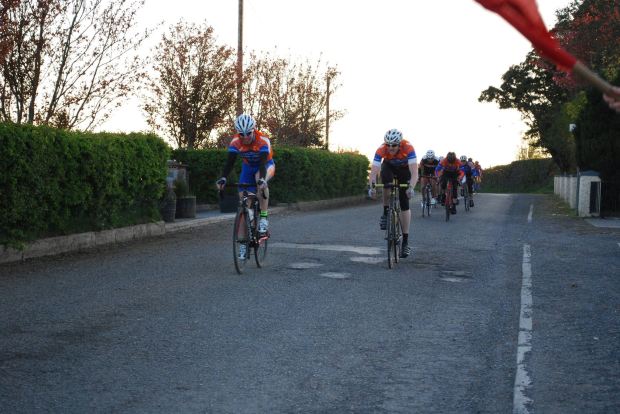 Race two of the Joe McNally League for 2015 brought the circus to a tough circuit in Clonalvy. Featuring narrow lanes with some fast descents and tough digs, pretty much everyone suffered including eventual winner, Derek Humphries, who had to recover from some early difficulties to hold off Johnny Holland in a two-man fight to the line.

Conditions were bright and dry with a light north-easterly breeze when limit set off ahead of semi-limit with a two minute gap. Semi-scratch were a further two minutes behind and scratch one minute behind them. The pace was high in semi-scratch according this struggling rider but even so, the scratch group quickly overcame their small deficit within a lap.

The attrition was high throughout the race but in spite of that, a large group came up the final dig through Clonalvy. Two riders rose to the top with Holland unable to hold off a charging Humphries, both riders finishing well clear of the fracturing group behind. Aureliusz Klus (Stamullen) took third spot.

Thank you to Evan and Joe Doyle for the picture.