Amstel Cold Sportive “A day in the fridge!” 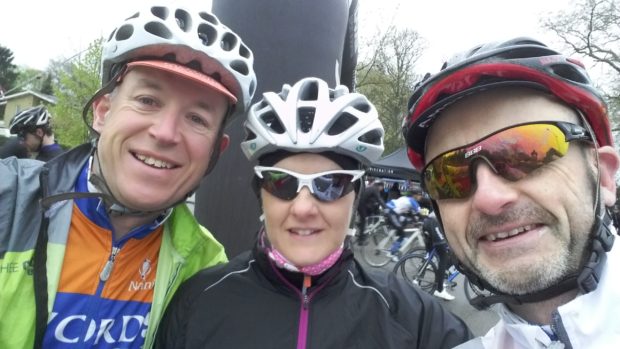 Amstel Cold – A Day in the Fridge (by Keith Sharkey)

Amstel claim their lager beer is best enjoyed at a temperature of seven degrees. For their sportive this year, they decided to ensure riders had to endure something a lot colder. Throw in four hours of incessant icy rain, and you start to have an idea of how those bottles of amber nectar feel sitting in your fridge. So it came to be that the official Swords representatives finished the Amstel Gold Toerversie event in various states of disarray.

The omens weren’t good after a grand total of 5k on our Friday test spin, when Alan’s wife Natalie shredded her derailleur hanger while putting in an explosive effort at the foot of the Cauberg. That’s what you get for trying to beat Philippe Gilbert’s time on the Strava segment Nat. Cue some frantic searching for a bike shop that might have one of those very esoterically shaped Lapierre hangers. (Let this be a lesson to always buy Italian, preferably Bianchi). Eventually the Irish connection, and more specifically the Kelly connection, paid off when a shop run by one of Sean Kelly’s ex team mates was able to install a universal hanger that could withstand even the power of Nat’s accelerations. With the obligatory mechanical safely out of the way, we were looking forward to the 150k and 100k routes over the only part of the Netherlands that isn’t so nether. The routes take in many of the iconic climbs on the Amstel Gold race route, and on paper it looks as if a drunken beetle has crawled out of a bottle of trappist beer and staggered his way around a map of the province of Limburg. Carbo loading on steak and frites, or schnitzel and frites, or pork and frites, was duly completed and all we needed was a continuation of the pleasant spring weather. 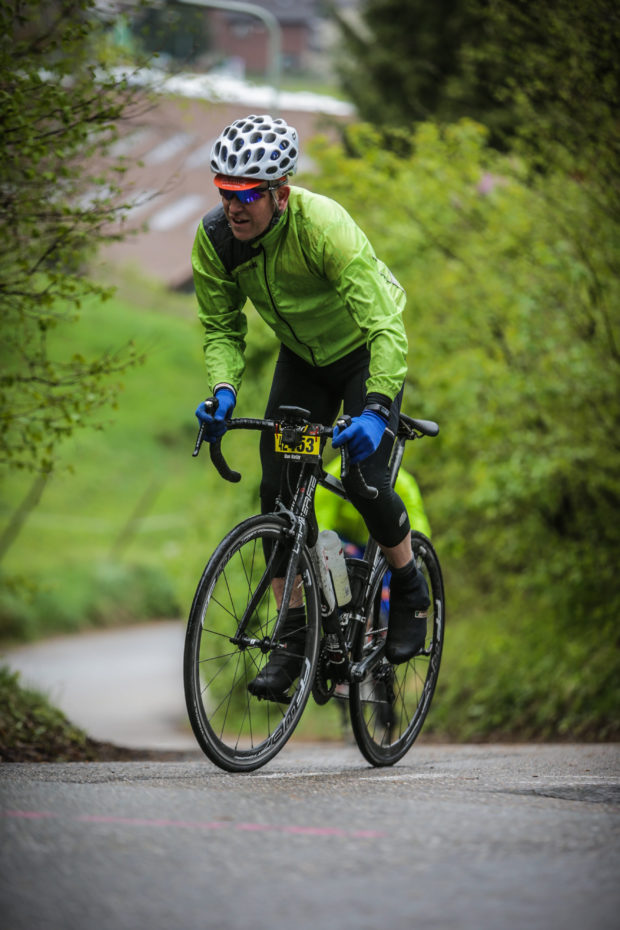 Fast forward to Saturday at a food stop around the 100k mark, and I’m shivering uncontrollably in a medical tent wrapped in three sheets of that tin foil stuff they give marathon runners when they’re about to keel over at the finish. There’s four or five other guys already here, each wearing their own tin foil shroud. Two very pale and shivering women come in and one immediately collapses and is unresponsive. The medics quickly strip her of her sodden gear, shrink wrap her in tin foil and blankets, and dispatch her to an ambulance. Knowing she is at least warm now, I’m vaguely jealous as I contemplate the remaining 50k back to Valkenburg. The weather gods have made nonsense of all the forecasts, and the rain has been falling and getting heavier since we departed Valkenburg about four hours earlier. The temperature varies between chill cabinet on the climbs, and blast freezer on the descents. Anybody not wearing full winter kit from head to toe is exposed, and those of us who are physically more Vincenzo Nibali than Mario Cipollini are suffering the most. After about forty five minutes and no sign of a sag wagon, I’ve slowly warmed to room temperature and contemplate getting moving again. Thankfully the rain has eased. I have a brainwave. I cut a whole in the tin foil shroud and wear it next to my base layer like a shiny body warmer. I also grab a pair of the medic’s latex surgical gloves to give my hands some additional protection. The other patients are watching me with “that’s not a bad idea” looks on their faces. Nat texts to say she has finished the 100k and is already tucking into her frites; way to rub it in Nat. I kiss the Swords crest*, nod to the remaining pop-ices in the tent and get back on the road. Three hours later I’m finally back at my hotel, looking like an oven-ready chicken in my tin foil gilet, but at least not hypothermic. Alan has already finished, having had the benefit of his Cipollini (post retirement) physique, but even he has suffered in the extreme conditions. 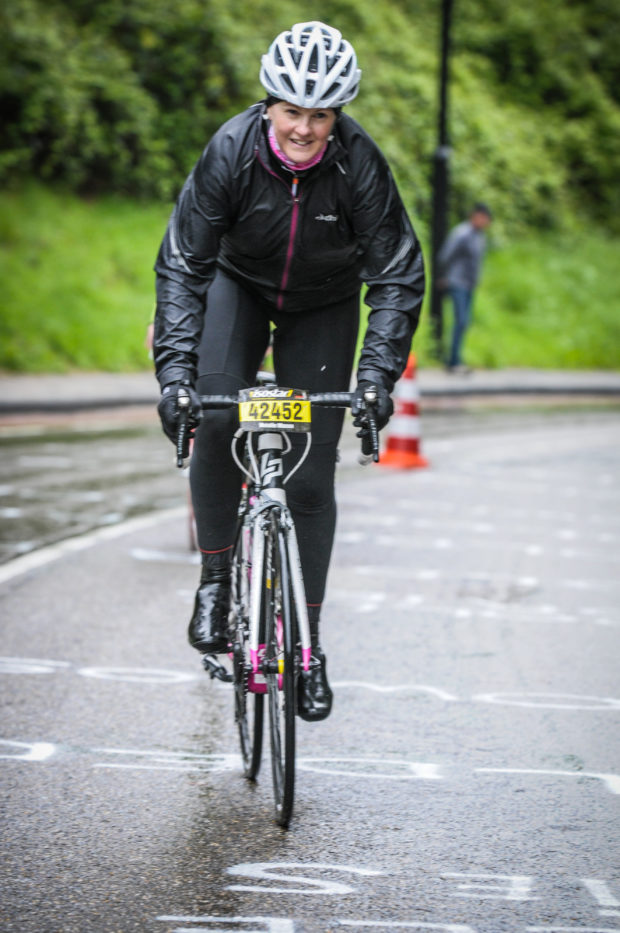 The weather gods, by now drunk on too much Amstel beer and no doubt laughing like drains, designated Sunday to be a bright, sunny and mild day, sufficiently pleasant for the pro’s to be riding in short sleeves. Thanks guys. We made the short hop to Maastricht to catch the roll-out of the men’s and women’s pro races, and once back in Valkenburg we were able to shuttle on foot between the Cauberg hill to see the race pass, and the “Amstel Gold race experience” cafe in town to catch the race and the finish on TV, becoming slowly more cheery with each “dubbel” (look it up). To prove the equation that an individual’s food fussiness declines in inverse proportion to beer strength, we finished the day at a strange Asian restaurant that seemed to specialise in the national dish of fried eggs and ham with everything, taking my fried egg total for the weekend to seven.

So would we recommend the Amstel Gold sportive ? Absolutely; a well run, safely marshalled event in a beautiful area along superb roads with friendly locals and participants. Just light several candles to the weather gods first.
*may have been hallucinating at this point 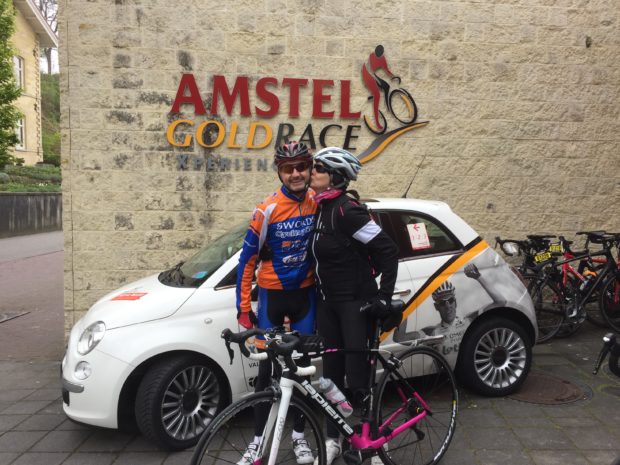 A kiss from the misses!

Thinking of signing up for the Amstel Sportive in 2018? heres some useful links:

We flew Ryanair to Brussels (we brought our own bikes), and arrange a private transfer to our Hotel (€100 per person)

Thanks to Keith Sharkey for the report, to Natalie for the photo’s and the Mechanical adventures, and thank you for reading!