What was your introduction to cycling ?(First Club, first races, first result)
It was when I went up to the Esplanade, on the Liffey Quays at Parkgate St to watch the finish of the 1956 Ras Tailteann that the bug of cycle racing got me. Strange, but this was the first time I had see cycle races at close quarters. There was, at least I felt, a great excitement at the event.

Your first big win?
My first ‘pot’ for Clann Brugha was placing 2nd in my first race, a CP on the Kentstown circuit. You never forget your first race. The entire field came together on the last lap. Half a mile to the finish and not an inch to spare on either side of the road I found myself in the middle of the bunch, the feeling of panic. Somehow I managed to get to the front as John Hanvey of the Gate CC was launching his sprint and I managed to stick to his wheel. I could not believe it when nobody passed us ’til we were over the line.

Your best season?
Probably 1959. I was in top form and sprinting really well, esp in the early season races, winning about 8. I didn’t finish second too often, it tended to be win or nowhere.

Career highlights?
A result that sticks out in my mind is the Martin Conway Trophy in 1960. It was a race in which i did a lot of attacking and above all a race that went as I had planned it. I attacked and got clear with a small group on a pre-planned hill on the last lap and won the sprint.

As an aside there was a fair bit of consternation behind when my teammates from Clann Brugha wouldn’t chase me down (as if they ought to!), esp from members of the National team. 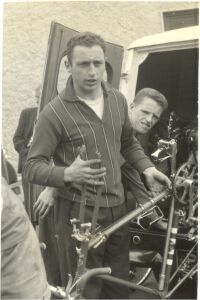 Myself and Brendan McGuinness loading the team bikes (probably for a team of 8) heading off to race.

What result/performance are you most proud of?
In Clann Brugha we particularily always raced as a team so one that gave me great pleasure the Liam Healy Memorial, a race which the Clann won three years running. I should point out that the main and most prestigious prize in this event was the team prize. In fact this race had no individual prizes.

I also remember the club winning the Team Prize in the Tour of Ulster (Ras Uladh). Shay wasn’t riding that one but met us at the train station to congratulate us. I suppose the fact that we all socialised together, reinforced the team ethic.

The Ras how many and best performance?
I rode 3 Ras tailteanns with mixed fortunes, but enjoyed them all. My first at the age of 21 was in 1957. I was only starting out at the racing and was strongly advised against taking part. I was placed 50th overall. My next Ras was in ’59 and ended when I crashed on the decent of Lady’s View, end up in Tralee Hospital and on the train home the next day! My final Ras was 1962 (?)which was won by my then teammate, Shay O’Hanlon and also marked my best overall placing, 17th. 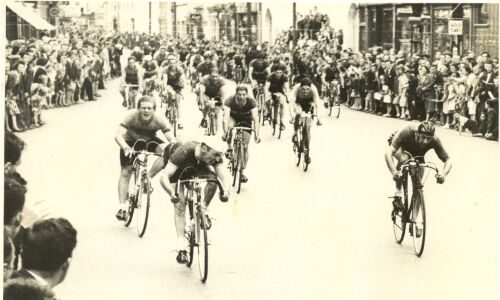 Stage finish in Ras, Killarney
(bunch sprint but a small break was up the road)
On my right is Mick Palmer (Westport), just behind Arthur Cable (Tralee) and just to his right is the present day Ras Director, Dermot Dignam

Memories of racing overseas?
I went to Germany in 1960 for a while and while there joined the Adler Club in Frankfurt. That too was fun. I remember they were pleased to have an Irishman in the club, as they already had a Spaniard, a Polish rider, a Frenchman and an Italian and it kind of made them a club of International note!

When things go wrong (Or the one that got away)?
1960 – one I let slip badly. It was the All Ireland 50 mile Mass Start C/ship, a race I was tipped to win. However I was out with the girlfriend the night before until 3 O’Clock in the morning and although I got into the break the next day, cramped and didn’t perform to the best of my ability.

Best rider (amateur) that you have ridden with or against?
Without question, Shay O’Hanlon.

Best Irish sprinter you’ve competed against?
One that springs to mind in Gene Mangan. Although I didn’t do battle with him that often, I always admired his style. Another sprinter that I also admired was Mick Cahill of Harps CC. Both had great top speed and always admired the way they wound it up coming to the finishes.

Biggest influences in your career?
Even though he was 6 years my junior, Shay O’Hanlon was the biggest influence on me. He was always great to talk to… about anything. He was rock solid, a wizard about cycling, a great brain for doing the right thing, and could read a race better than anybody I have ever known. I admired him greatly and I still do. 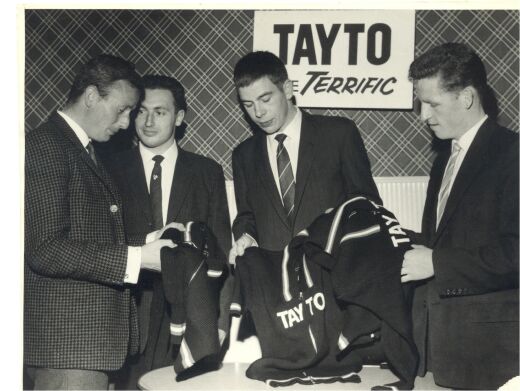 How long with Swords Club?
I was introduced to the Swords club about 6 years ago by Paddy Griffen and they are stuck with me now.

Favourite present day Pro’s?
Probably Franceso Casagrande, a good all rounder, a battler with nice style, and a man with great determination

Favourite Pro sprinter?
André Darrigade – he always had immense power at the end of a race.

Best one day Pro race?
Can’t watch any of them at the moment, but I’d watch any bike race. I suppose one of my (many) favourites would be Paris Nice.

Race day nutrition (Breakfast — mid race drinks — recovery etc)?
Always start with porridge and orange juice.
Mid race – fig rolls (or energy bar) and an energy drink.
After the race – I have to have a cup of tea (even before the shower) then afterwards, feet up, watch the telly and eat everything in sight

What do you love most about cycling?
I suppose it’s the fact that you have the freedom to go anywhere under your own steam.

Favourite Cycling Magazine?
Cycle Sport – there’s a lot in it, and often don’t get to finish reading it

Best Cycling Book(s) you have read?
The last one i read was ‘It’s not about the bike’ about Lance Armstrongs battle with cancer. A book about overcoming personal problems that many people would crumble under. A great example to us all.

What advise would you give to 1st year racer?
Ask questions. Ask lots of questions. About anything and everything – training, the bike, race tactics etc – don’t presume you know.

How can they then turn good performances into good results?
Find you strengths and work on them. If you’re not a sprinter you have to get away before the finish. If in a group , evaluate your opponents and act accordingly.

Also if you are lucky enough to have the ‘fast twitch fibres’, don’t neglect other aspects of cycling. Too many sprinters shut up shop when the hills come. You might be too bulky to be a pure climber but you can become a better climber. Attack on the hills, don’t be content for all races to come down to a sprint. And visa versa, so many people say they can’t sprint. But do they ever practice it? Practice and belief will make them better finishers. You can improve on all aspects of cycling if you put your mind to it.

Most enjoyable Tour (non racing)
One we used to do a few years back that took in the the Carlingford area. 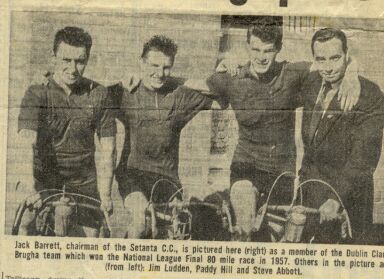 It was always good to succeed as a Team.