This years McNally Swords CC Road Race C/ship was run over the challenging Stamullen course and with plenty of hills, drags & descents it was going to take a special effort to win this one. First attack of the day was Jason Kelly (after about a mile) and his enthusiasm was rewarded by being left out out there to fry until he worked off some of that excess energy!!! After Jason’s effort was reeled in the bunch pretty much kept up enough of a pace enough to discouraged any more attacks and the main group stayed together pretty much up to the last lap. At the start of the last lap Anto McMahon, Gerry Martin & Sean Tierney got a small gap of a few seconds. James Whelan jumped from the bunch and got across to these three before Stamullen, and attacked on the hill before anyone else came across. James committed himself fully to the attack and started to open a good gap. He timed it well as Sean Rock & Adriaan Pretorius were on their way across and caught & passed the three escapees on the hill only to find that James was already up the road. They worked hard to bring him back , but James was in a pretty determined mood and seemed to being getting further away. Hard riding from Keith & Fergus Ryan brought the bunch up to Sean & Adriaan but James was disappearing into the distance. As the bunch looked at each other to see who who going to take up the chase, James pressed home his advantage and soon was out of sight. This is where it pays to be a great tester as James is and the bunch pretty much knew that they were now racing for 2nd place. Jason Ludgate & Anto tried to tie up the podium positions with a big effort on the long drag before the decent into the finish but were pulled back and it was going to be a bunch gallop for the remaining places. Up ahead James efforts were rewarded by having time to savour the victory with a two handed salute, a few hundred yards of the scramble for 2nd place. A huge win for James, holding off the bunch for the best part of a lap. A popular winner whose enthusiasm for the sport should be bottled and who has been a member since he was about the same age as young James Morgan. 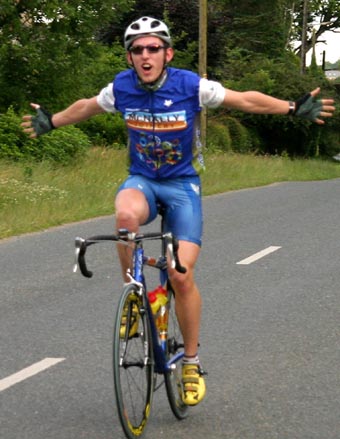