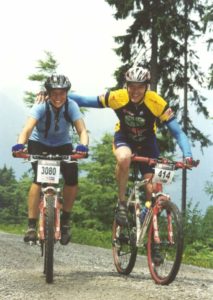 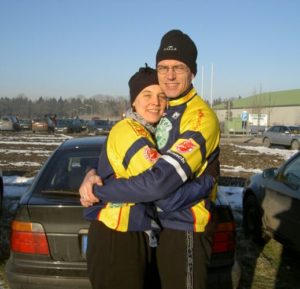 Hi All,
And yet another year gone by. A year made of challenges! I did a total of 22 races starting the season late March after a nice training camp in Rimini Italy. We covered some 800 km (500 miles) in 10 days. If you know the region there, there are some bl#$%^ high mountains with nice steep ramps where you can read Pantani on! The man himself is from the region so...... Anyhow did 11 road races including Club races and criteriums. The highlight of the season for me were the Mountain bikes races and Triathlons (started these in 2002). Mountain bikes races are called marathons and there are people from allover Europe participating. I did Garmish, Tegernsee, Salzkammergut (European Championship-BRUTAL) and Rupohlding. If you surf the web with these name you will find the information. These races are on ever year. In between, I did four triathlons what we call the "short" distance...1,5 km swimming, between 40 and 52 km on bike and 10 to 12 km run...I quickly realized 1,5 km in the water is something... Bike and running are ok for me and managed to finish 11th once in Karlsfeld. Now I really picked up on this and started from October last year, to train in a swimming pool twice a week. I also increased my running km along with biking. This year I have a total of 300 km running, 377 km Mtb, and 495 road bike. I planned to do two Mountain bike races on the 1st and 6 of June (Garmish 100km and Tegernsee 98km). Then the rest of the weekend will be Triathlons. highlight will be the OberBayern cup series (6 triathlons) and the International triathlon of Witten. So far I have done two running competitions with pretty good time for me, still marging for progress though. But at least I know now I can run 4'30" per KM so an average speed of 13.8km/h.Ah yes, one more thing, I proposed to my girlfriend Tina and will get married this year (after the season though) in September. Tina and I met on a MTB race, and we participate in the same competitions...Helps a lot to understand the hours spent training :-))) That is all for me ...I wish you all a Happy New Year 2003